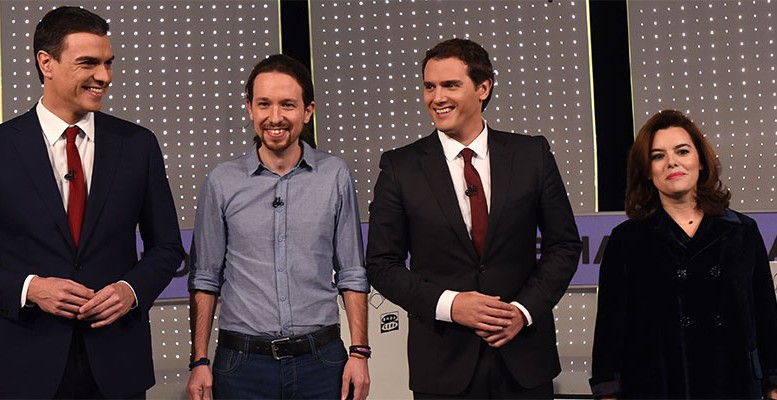 Spain will go to the polls on Sunday and expectations have certainly been met for a more interesting race to the finishing point than in 2011. New kids on the block, centre-right Ciudadanos and anti-austerity Podemos, have put an end to the over 40-year two-party dominance of the Popular Party (PP) and the Socialists. The new government could implement more reforms with expected positive economic impact, but the downturn in markets such as Latin America is likely to weigh more on Spain’s stock market.

Latest surveys have shown the incumbent PP ahead, but short of a parliamentary majority, unlike four years ago. Ciudadanos and Podemos are challenging the Socialists for second place.

A lot of voters may remain undecided, but experts see the outcome as a minority PP government, with Ciudadanos as king-makers.

So will this political alliance be stock market-friendly? The Ibex 35 has underperformed its main European peers in 2015, recording an 8.3% accumulated decline so far this year, compared with a 6% rise for Germany and 10% for Italy.

But if the bourse’s performance after previous general elections is anything to go by, then a late December rally is expected, coinciding with investment managers’ year-end portfolio adjustments.

In the medium-term, however, the emerging markets’ slowdown could dampen enthusiam towards Spanish stocks.

On the domestic economic front, post-election focus will be on stability and on how the new administration tackles unemployment.

The PP’s links with some high-profile corruption cases has led to voter disaffection, coupled with the belief that not enough has been done to create jobs in a country with over 50% youth unemployment.

“During their first mandate, the PP followed the path of modern macroeconomic wisdom. But they also did what Brussels told them,” said a London-based US asset manager who requested anonymity.

“With a second term, the PP can implement more reforms, particularly in areas like jobs, pensions and the deficit,” he said.

Spain posted one of the fastest growth rates in the eurozone in the third quarter. But the jobless rate in the EU’s fifth largest economy remains in double digits.

The country’s so-called temporary contract economy is largely to blame. Temporary workers represent more than a quarter of the total working population in Spain.

But despite the expected positive economic impact of labour and other reforms, the downturn in markets such as Latin America is likely to weigh more on Spain’s stock market.

“Bad earnings in countries like Brazil, coupled with weaker currencies, have led to poorer consolidated numbers in euros for Telefonica and Santander, big hitters in the Ibex 35,” the US asset manager said.

“And even if the political risks disappear – no nasty surprises on Sunday and tensions over Cataluna’s independence ease – there are not many new stock ideas in Spain. The market did very well in previous years, which means that a lot of companies are a bit pricey now,” he said.