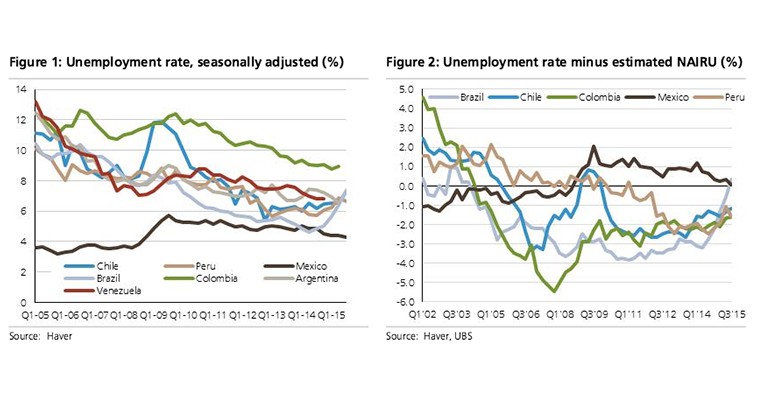 UBS | We have long argued that Latin America is in the midst of a long, protracted economic adjustment to the new reality of lower commodity prices — as China’s investment – led growth strategy runs out of steam — and of tighter capital conditions — as investment opportunities into commodities fall and the Fed gears up to raise interest rates. For the last two years, we have witnessed a marked slowdown in economic activity in the region: Latin America is currently underperforming global growth by the largest margin in the past quarter century and its economies are expanding at rates well below potential, with some mired in outright recession.

And yet, despite this gross economic underperformance, one thing we have not seen so far is a spike in unemployment rates in the region. Indeed, most unemployment rates are running at close to historical lows and below most estimates of their respective NAIRUs.

How can we reconcile low activity readings with such seemingly tight labour markets? Beyond a fall in labour participation rates in recent quarters, it is widely accepted that Latin American labour markets are quite rigid for the most part, with high costs of laying – off employees. More generally, employment tends to be a lagging indicator of activity, particularly in a downturn where non – linear labour dynamics may be more evident than in an upturn. Specifically, firms tend to hire only gradually in the upswing of the cycle, while the decision to lay off in the downswing is usually delayed until the point where larger scale firings are made necessary. This is particularly true when the costs of rehiring and training may be high. Brazil is a good example of a country where in the most recent cycle, the unemployment rate troughed well after the beginnin g of the economic slowdown (mid – 2014 vs 2012).

But beyond these labour market properties and dynamics, we think there is another powerful reason why Latin American labour markets have yet to reflect the softness of the economy in many countries. In particular, it is important to understand what the key driver of activity for these economies was in the past decade. For many of them, especially the purer commodity plays — like Chile, Colombia, and Peru — much of their economic dynamism was driven by a boost to investment in non – labour intensive sectors such as mining and energy. To the extent that these economies have slowed or are slowing — and are correcting their current account deficits in the process — they have done so, first and foremost, by unwinding investment in these sectors. This is not to say that consumption has not slowed — it has — but to a much lesser degree than i n investment.

Tight labour markets have had another consequence: they have amplified the degree of pass through to inflation. With wages remaining high, companies have found it easier to transfer higher costs to consumers. Most inflation targeters in South America have found thems elves with much higher inflation than their central banks and the markets had initially anticipated. Moreover, this inflation is more persistent and wider than originally perceived, with both headline and core measures now running above target in Brazil, Chile, Colombia, and Peru. Not surprisingly, all four countries have had to jack up interest rates in recent months despite the weakness in their respective economies.

True, Philips’ curves in the region remain relatively flat. A breakdown of inflation by sourc e in the past three years (see figure 7) shows that, with the exception of Brazil and Chile, the labour market has not played a major role in determining inflation. However, the fact that Mexico, the country with the highest labour market slack in the period showed the lowest FX pass – through of any country suggests that the effects of labour market tightness may be picked up in other components. A high FX – pass through affecting both tradable and non – tradable prices alike such as we are seeing in a number of countries point in that direction.

Is low unemployment here to stay?

So what could turn around this situation? Is it really conceivable that unemployment can stay at thes e low levels for much longer?

We doubt it. For those countries that are unwinding investment booms — such as Chile, Colombia, and Peru — we think the way the unemployment rate is ultimately affected is through a tighter stance in fiscal policy. True, this has yet to be on display in these countries, largely because they have fiscal rules in place that allow them to draw on rainy day funds or to borrow in order to stabilise their spending. in the face of lower commodity prices. While this is commendable if t he goal is to stabilise spending in the face of cyclical drops in commodity prices, it is less so if what we are witnessing is a more structural decline in those prices. And unfortunately, given the downside risk to growth to China and its inexorable move from an investment – led to consumption – led growth model, this is looking increasingly more likely at present.

Indeed, we are already seeing some signs that the labour market is adjusting. In Chile, the unemployment rate is finally rising, reaching 6.4% from a low of 5.6% in Sep’13. Moreover, much of the increase in employment in recent months was led by public sector hiring, which we expect to slow as the government is forced to adopt a less expansionary stance. In Colombia, the unemployment rate remains low by historical standards at 8.7%, but the quality of this employment is deteriorating rapidly, with a sharp surge in informality.