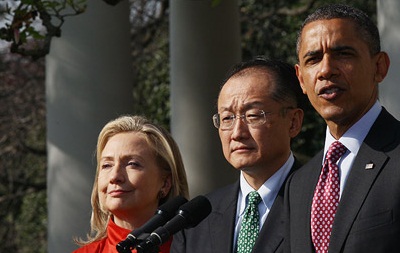 NEW YORK | It could have been Hillary Clinton, one of the most well known US political figures; it could have also been Larry Summers, one of the most respected (and yes, also hated) figures in US economy; it may have even been Jeffrey Sachs, a very prestigious economist.

But Obama has chosen a low profile candidate to the lead the World Bank: Jim Yong Kim, Dartmouth College president and global health expert. Kim is a Korean-born physician that pioneered treatments of tuberculosis and AIDS.

It is a very unconventional pick that could help to avoid criticism in poor and BRIC countries of the gentlemen’s agreement between the US and Europe to ensure that a European runs the IMF and an American the World Bank.

Why will this option quell any criticism: Kim may have the experience on development issues that former candidate, Robert Zoellick, lacked. And that is important, since World Bank’s mission is to fight against poverty.

“It’s time for a development professional to lead the world’s largest development agency. Jim has truly global experience. He has worked from Asia to Africa to the Americas, from capitals to small villages. His personal story exemplifies the great diversity to our country,”  Obama said during the presentation ceremony, with the presence also of Kim, Treasury Secretary Timothy Geithner and Secretary of State Hillary Clinton.

“The nomination of Jim Yong Kim to head up the World Bank is a brilliant choice on President Obama’s part,” says Asia Society Vice President Suzanne DiMaggio. “The Korean-born Kim is a highly respected development and global health expert who also has extensive management experience. This under-the-radar move should help to quell critics from developing and emerging economies who have been lobbying for a non-American face to lead the Bank. It also recognizes Asia’s ever-growing importance on the world stage.”

Developing countries are still posing an unprecedented challenge to Obama’s pick with their own candidates: Ngozi Okonjo-Iweala, Nigeria’s finance minister, is the best situated because the backing of the three African countries on the World Bank board; Jose Antonio Ocampo, a Columbia University professor who had been finance minister for Colombia, lacks the support of Brasil and Colombia’s government.

The actual selection will be made April 21st  by the World Bank’s 25-member executive board. The United States, as the world’s largest economy, has the largest percentage of the votes, so it will most likely be Kim.

HAS TIME COME TO CHANGE THE RULES?

“That will leave a the question of fair and merits based selection of World Bank and IMF unresolved. Some people say that now is the Europe and not the US the one that has to back down the gentlemen’s pact. Some Americans also argue that Europe, and not Washington, should be the first to relinquish the traditional lock on these top financial slots. The US, after all, hasn’t really lost much of its own share of global output when compared to Europe, which  has gone from about 35 percent of global GDP in 1970 to just about 26 percent today. Europe shrugged off such pressure last year, and Washington apparently feels that gives it the cover it needs to do the same. Only last summer, in the wake of the spectacular flame out of the IMF’s playboy director general, Dominique Strauss-Kahn, that institution not only reaffirmed Europe’s prerogative but even tapped (excuse the pun) DSK’s compatriot, Christine Lagarde, for the post. That she was the first female to occupy it doubtless left BRICS and other rising powers cold” points out Slate magazine.

NOTE: As well as an experienced physician, Mr Kim seems to have a cool reputation among his students. You can see him at a singing contest, kind of the American Idol of Dartmouth College several weeks ago rapping, singing, and dancing in a white, studded leather jacket and spaceman sunglasses, gloves cut-off at the fingertips. Enjoy the video at the 2:05 mark. And yes, he is doing the robot.

Be the first to comment on "Weekend | Obama chooses an unconventional candidate for the World Bank: will it calm developing countries?"