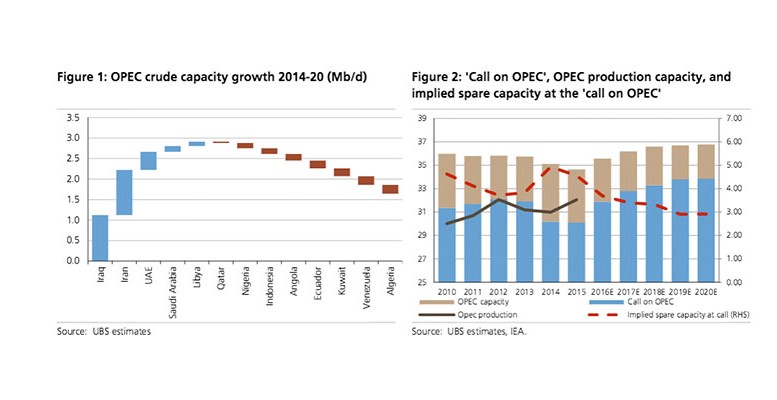 UBS | In this note we present our updated analysis of OPEC production capacity. On a headline basis the numbers are alarming – we expect the group to add close to 1Mb/d to its effective production capacity in 2016 and then a further 0.6Mb/d in 2017. Over the 2015- 20 period we expect total additions of 2.1Mb/d. Yet the majority of this comes from a resolution of above – ground issues, rather than new fields reaching first oil: 500kb/d from the currently shut – in Saudi – Kuwaiti neutral zone, 700kb/d from a ramp – up of Iranian output to its pre-sanctions level of 3.6Mb/d, and a ~0.6Mb/d from a normalisation of the Libyan security situation. Material net capacity additions beyond this are limited to the UAE and Iraq. We provide more detail on a country – level below and within this note.

We expect the group’s production capacity to increase to 36.8Mb/d in 2020 from 34.6Mb/d in 2015. This is driven primarily by a return of production from Iran, Libya and the Saudi – Kuwaiti neutral zone, resolving above – ground issues rather than new investment. Genuine additions from new fields are limited to the UAE and Iraq, while the more peripheral OPEC producers are expected to see production decline, driven by a slowdown in investment and sanctioning activity. Algeria, Ecuador and Indonesia are particularly affected with no major startups in the pipeline, while Nigeria and Angola see declines begin in 2018 – 19 as the 2015/16 slowdown in FIDs b egins resolving.

We project zero net capacity increases in 2016 outside Iran (3.6Mb/d by year – end) and Iraq (up 250kb/d y/y in FY average terms although most of this impact has already been felt in 2H15). 2017 likely sees the restart of some neutral zone production but Saudi and Kuwait have already ramped up production from their ‘swing’ fields to compensate – so there may be room for this to ease. Further out, as in the non-OPEC world, a ‘hole’ in capacity appears to be being created by project deferrals and cancellations.

With no material spare production capacity outside Saudi Arabia and Iran, and none projected to come online in 2016, the recently discussed ‘freeze’ seems largely an acknowledgement of existing conditions. It is helpful for sentiment and may prevent further damaging ramp-up from remaining capacity as the oil world rebalances. But the real issue is that all equal there appears limited prospect of a reinstatement of the level of spare capacity the market has historically been comfortable in operating with.