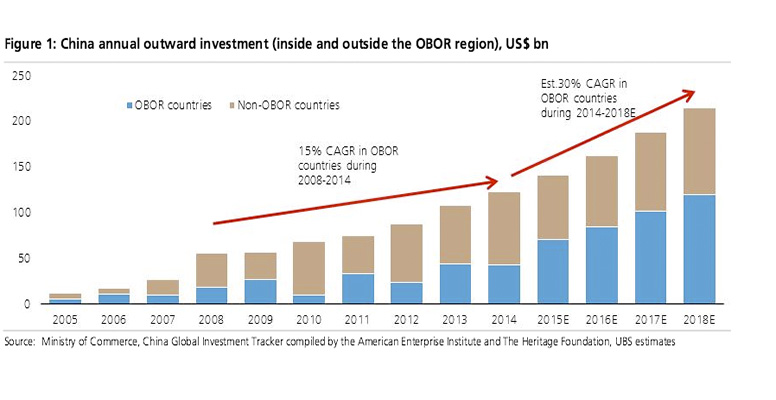 UBS | The firm’s APAC strategists and economists believe China and Japan will play significant roles as regional economic patrons over the next few years. We estimate the amount of patro – dollars, namely China’s outward direct investment (ODI) in the ‘One Belt One Road’ (OBOR) regions, will exceed US$200bn in 2016 – 18. Patro – dollar spending growth will likely accelerate to 30% per annum in 2015 – 18 from 15% in the past

In addition to traditional financiers of Chinese ODI project, such as China policy banks and commercial banks, four new institutions have been established over the past two years to finance OBOR projects. Collectively, their initial spending power will reach US$150bn by 2018. In the long term, they could provide US$2trn of funding. The new institutions are: The Silk Road Foundation, CIC Capital, the Asian Infrastructure Investment Bank and the New Development Bank.

A database of 1,500+ projects reveals diversifying targets of patro – dollars

Listen to the countries receiving patro – dollars — what do they desire?

UBS analysts from across APAC provide perspective from countries that are recipients of patro – dollars. After all, neither China nor Japan can achieve patronomics without the collaboration of foreign governments. Our colleagues report that: 1) Thailand, Malaysia and Indonesia are politically friendly with China, while territorial disputes impe de investment in India and the Philippines; 2) Chinese tourism is widely viewed as a growth driver for local economies (even more than infrastructure); and 3) access to technology and connections with Chinese merchants are sweeteners in most countries.

Poor infrastructure is a key bottleneck for the development of many less advanced areas in the OBOR region. The ADB estimated the need for infrastructure investment in Asian countries amounts to US$8trn between 2010 and 2020. Meanwhile, many Asian countries possess abundant resources that are ready to be utilised. We believe patronomics will benefit both local economies and the exports of the ‘patrons’ (especially Japan and China in the ASEAN region). Patro – dollars could facilitate a win – win strategy, by upgrading transport infrastructure, hotels and resorts that could potentially attract millions of Chinese tourists and create a large number of local jobs.

Many Chinese companies already have firm footprints in OBOR countries. Those that own numerous ODI projects and have Buy ratings from UBS analysts include: China Railway Construction (CRCC), China Merchants (CMHI), Bank of China, Alibaba, Fosun International and Shanghai Jinjiang International Hotel (A – share). Although patronomics does not represent a major share of their assets today, it could make a significant contribution to futur e growth.