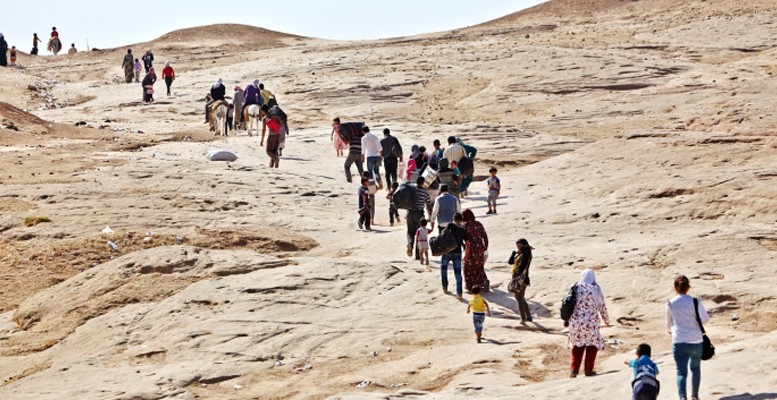 We turn our attention to Europe, compelled by shocking images of refugees’ deaths. To the stories of the stateless having identification numbers written on them and told their trains are headed to safety, rather than camps. Eerie reminders from the past merge with disturbing pictures of the present.

What will be the refugees’ future?

War has uprooted half of Syria’s population, creating over 4 million registered refugees, with tens of thousands more fleeing to Europe to escape humanitarian crisis or armed conflict from Afghanistan, Eritrea, Nigeria, Iraq, Somalia, Pakistan and Sudan.

Inspiringly, former Uruguayan President Jose Mujica is opening his summer home to 100 children, while Pope Francis calls on parishes and religious communities to provide shelter. Yet globally, few nations are doing enough. The US has accepted less than 1,500 Syrians, although President Barack Obama has pledged to increase it to a nominal 10,000. A European Commission plan advances to settle 160,000 in the European Union (EU). Many European nations, including Germany, are pledging to do much more.

But others insist the migrants apply for asylum in the first safe country they reach (often an overloaded Greece), pushing back on proposed mandatory quotas. (There is something absurd in watching countries that colonized or controlled much of the world now protecting borders.)

It’s déjà vu all over again.

When did this happen?

“Fifty percent of the victims of this crisis are kids,” EU Commissioner Kristalina Georgieva said at the New America Foundation. “When I close my eyes and think of the Syria crisis, I don’t see the face of a soldier or a rebel. I see the face of a girl or boy.” At the time, she also pleaded for us to “keep our hearts open, our wallets open, our borders open because this is an extraordinary crisis.” United Nations Secretary General Ban Ki-Moon called the civil war and its consequences “a humanitarian crisis of unprecedented proportions in recent history.”

The answer: All these statements were made in 2013. At the time, 2 million Syrians had become international refugees (of a total of 6.25 million displaced), overwhelming small neighboring countries.

In this millennium also, the US invasion and destabilization of Iraq led 4 million people to flee their homes.

And there are those today too who, but for mostly closed borders, would leave their countries. Very few of the homes and facilities destroyed in the 2014 Israel-Gaza conflict have been rebuilt one year later. The United Nations (UN) warns Gaza could become “uninhabitable” in just five years. In another assessment, a UN-backed construction authority says it could take 20 years to undo the damage wrought in just 50 days. Construction materials are restricted through blockades by Egypt and Israel, two countries that are major recipients of US aid. The situation is reminiscent of Western sanctions that led to over a million Iraqi deaths after the destruction of its infrastructure, in what some leaders call a genocide.

In Yemen, an estimated 80% of civilians now require humanitarian assistance, half of them children, six months after the Saudi-led invasion. The Saudi military dropped cluster bombs on civilian areas, which is illegal under international law, even as the US is working to finalize a new arms deal (in an apparent violation of the Leahy Law, which bars America from sending arms to military units with major human rights violations).

We have the opportunity to shape the world we see today. Are we up to the challenge?

Additional humanitarian assistance must be provided for those displaced inside their nation and abroad, especially by the Western world. While almost a million are expected in Europe this year, 86% of the world’s 20 million refugees are in developing countries.

The severely underfunded UN appeal for Syria must be supported; horrific conditions are already leading some to return to chaos. A full implementation of the plan to resettle refugees concentrated in Hungary, Italy and Greece should receive commitment through the EU, with the stepping up of relatively weak commitments globally.

So too should this lead to a robust framework for dealing with refugees, as per the UN Refugee Agency (UNHCR) call for “large-scale emergency reception, assistance and registration efforts in those countries” as well as “asylum, migration, and civil protection agencies and processes” that will serve refugees well in the future. Special attention should be given to the rights granted under the UN Convention for the Rights of the Child to protect already traumatized children.

The international policy of Western nations, especially the US, must be one of high visibility and thoughtful consideration. In the US, there has been virtual silence on foreign policy priorities, except when it comes to beating the drums of war, the Iran deal or the normalization of relations with Cuba.

Foreign policy critiques are often derided as “apologist,” despite US policies that have led to arms proliferation in the Middle East, unjust wars, the rise of extremist organizations and mass displacement. Politicians reflexively tout an American exceptionalism that represents primarily an exception to international laws and global responsibility.

We need a sustained conversation about our foreign policy and its consequences, to include tools of influence to deal with current realities. For example, most Syrian civilian deaths have been caused by bombs of President Bashar al-Assad, rather than the Islamic State (IS).

Looking forward, particular attention must be paid to climate projections. Several current crises have roots in displacement resulting from climate-related issues, including Syria, Eritrea and Somalia. Twelve of the 15 most water-scarce countries lie in the already stressed Middle East. Overall, 250 million to 1 billion people may be displaced due to climate by 2050, according to an advisor to the United Nations High Commissioner for Refugees.

Multiple pledges have been made by world leaders to respect the 2-degree Celsius scientific limit. Yet even with recent climate action, the world barrels toward an apocalyptic 4 degrees or more rise. Even under a good scenario, the very fabric of society will likely be shred as water supplies, agriculture and shelter come under severe stress.

New structures are needed to guarantee basic human rights and opportunity. Socialism is being eroded in Western nations through pushes for punishing austerity and privatization. Capitalist policies further concentrate wealth, with the top 1% likely to hold half in the world’s wealth next year.

Overall, institutions and processes must be strengthened to accept those displaced by war or climate realities, often resulting largely from Western action. And nations must adopt trade, agriculture, environmental, water, international and domestic policies to promote social justice.

The current crisis is a test of multiple parts. It tests our ability to intervene now to support refugees and resolve current international crises that led to their displacement. But so too does it test our ability to build new and just societies. In the face of a growing, unprecedented challenge, we must lay new ground for a world of human rights and human dignity.

The views expressed in this article are the author’s own and do not necessarily reflect Fair Observer’s not The Corner’s editorial policy.