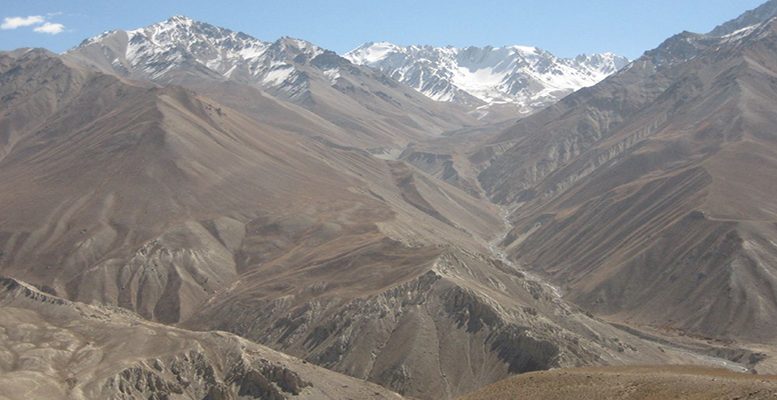 The afghanistan side of the Wakhan corridor

Mirwais Parsa | China, an economic giant, has started the move to revitalize the ancient Silk Road. Its ambitious Belt and Road (B&R) initiative, which includes plans for a Silk Road economic belt and the 21st-century maritime Silk Road, aims to connect continental Asia, Europe and Africa. The project has an estimated investment requirement of $5 trillion in infrastructure across 65 countries.

A major B&R investment in South Asia is the $46-billion China-Pakistan Economic Corridor (CPEC) project, which connects the city of Kashgar in Xinjiang-Uyghur Autonomous Region of China to Pakistan’s Gwadar Port. An important part of the CPEC is the reconstruction and upgrading of the Karakorum Highway, a 1,300 km paved roadway across the Karakoram Mountains connecting Kashgar to Abbottabad. The highway, which first opened to traffic in 1986, serves as an important trade and transit corridor between China and Pakistan. It has shortened the distance between China and the Middle East from 15,900 km via the Malacca Strait to a 3,700 km land route through the Khunjarab pass.

Between China, Afghanistan, Tajikistan and Pakistan, inside the Pamir Knot, lies the Wakhan corridor. This strip of land sandwiched between the four countries was created as a buffer between the territories of British India and Tsarist Russia in the 19th century, which was then formally demarcated between the Kingdom of Afghanistan and the Chinese People’s Republic in November 1963.

The Wakhan corridor has historically been an important transit path of the ancient Silk Road route. According to Alexander Farhad, in the fourth and fifth centuries, the passes across the Pamir led Chinese pilgrims to the Buddhist centers in today’s Afghanistan and India and were used by Persian merchants to sell their goods in the Chinese market. Nazif Shahrani, in his The Kirghiz and Wakhi of Afghanistan: Adaptation to Closed Frontiers and War, maintains that until the collapse of Mughal Empire in India, Wakhan was one of the main routes for traders and merchants between India, China and major cities like Bactria and Bukhara in modern-day Afghanistan and Central Asia. It was due to the rapidly developing use of sea routes by Westerners to reach India and China in the late 15th century that the importance of the ancient Silk Road from Rome to China went into decline.

Given the geography of the Pamir Mountains, building infrastructure in the Wakhan could be difficult and costly. However, there are many instances of projects that have been successfully completed in the similar and even more geographically complex terrains of the region. The Karakorum Mountains, into which the Karakorum Highway was built (using 1960s and 1970s technology, taking 20 years to complete), and the Pamir Mountains where the Wakhan corridor lies are in the same area with similar topography. A nutshell comparison of these areas indicates that the feasibility of infrastructure in Wakhan is increasingly viable given the road and tunnel-building technologies available in China today. The cost of the 400 km Wakhan project would be trivial compared to the $794-million upgrade of the Karakorum Highway or the $4.2 billion for the 1,600 km China-Tibet railway that opened in 2006. If such mega projects could be built on the roof of the world way back in the late 1970s and early 2000s, there is no reason to perceive geographic complexity as a barrier to building connectivity via Wakhan.

According to a report, the trilateral agreement was signed in Dushanbe to connect Tajikistan and Pakistan via the Durah Pass during the tenure of Burhanuddin Rabbani, Afghanistan’s president from 1992 to 1996, after a feasibility survey to assess the best possible route that could connect Tajikistan and Pakistan. Although the decision has not yet found practical implementation, all the countries have independently built infrastructures approaching the corridor in their respective territories over the past decade. These recent developments — which include the Lowari Tunnel Project, the first phase of the Chitral-Tajikistan highway completed in 2017; the five bridges over the Panj River constructed since 2002; a road built west of Wakhan by the Chinese military in 2009; and roads connecting Ishkashim-Baharak to Faizabad and onward to Afghanistan’s ring road and the port of Hairatan — imply that all the countries are implicitly keen to develop this route. These recent improvements have made the possibility and prospect of building infrastructure through Wakhan itself much more feasible.

What is currently missing is an initiative to open borders and collaborate. While geographical complexity has not been a barrier to the development of the infrastructure in Wakhan, security concerns and regional political play seem to be the major roadblocks on the way to the development of Wakhan.

China’s main security concern has been from the separatist movement in its Xinjiang autonomous region. The movement of terrorist groups and the possibility of them building links with Xinjiang separatists was enough of an impetus for Beijing to keep the border closed for decades. However, these concerns seem to be fading away due to China’s massive investments in the Xinjiang region, where employment opportunities and improving living standards have brought more stability and peace.

Moreover, India, Afghanistan’s close regional ally, may not be happy with Kabul joining the CPEC. India opposes the Belt and Road initiative because Pakistan-administered Kashmir, through which the CPEC passes, is a disputed territory between Delhi and Islamabad and it has blocked India’s direct access to Afghanistan and Central Asia. Instead, India has invested in the trilateral Chabahar project with Iran and Afghanistan to compete with the CPEC. More importantly, India’s concern might be that the opening of Wakhjir pass, along with the already-opened Khunjarab pass, will give China the upper hand by enhancing its geopolitical and geo-economic dominance in the region.

However, countries around the Wakhan corridor have good economic ties and mutual interest for further cooperation with each other. The geo-strategically important Wakhan route, if built, would be the most efficient and the shortest possible bridge in the region. This would further strengthen trade and personal contacts. Chinese investment in Afghanistan to date stands as the largest foreign investment in the country. Three Chinese state-owned companies have invested in Afghanistan’s lucrative mining sector after it was opened to foreign investors in 2007. Afghanistan’s Ministry of Mining and Petroleum signed the contract with a consortium of Chinese state-owned companies — the Metallurgical Corporation of China (MCC) and Jiangxi Copper Company Limited (JCCL) — for the exploitation of the Mes Aynak, the world’s second-largest copper deposits, in Logar province in 2008.

The other major Chinese investment in Afghanistan is in hydrocarbons. Based on a contract signed in 2011, China National Petroleum Corporation (CNPC) and its Afghan partner, Watan Oil and Gas, secured the exploration, development and production of the three blocks of hydrocarbon deposits of Amu Darya basin in Sar-e-Pol and Faryab provinces of Afghanistan.

According to data by the Afghan Central Statistic Organization, bilateral trade between China and Afghanistan has surged from $432 million in 2008-09 to $1.09 billion in 2016-17, an increase of 153%. Given this upsurge, the future of economic cooperation seems promising. This is further encouraged by connectivity that was recently established between the two countries with the opening of a railway in 2016. Similarly, Tajikistan and Pakistan have close economic and trade relations between themselves and also with Afghanistan (discussed here, here and here), which will benefit further from better and shorter trade routes among them.

There are three main advantages of building infrastructure through Wakhan corridor.

First, the inhabitants of the Pamir Knot — encompassing Gorno-Badakhshan Autonomous Region of Tajikistan, Wakhan District in Badakhshan province of Afghanistan, Kashgar in Xinjiang Autonomous Region of China, and Chitral in Khyber Pakhtunkhwa of Pakistan — share a common history, culture, religion and geography. People in this enclave have been isolated from wider civilizations for centuries. Moreover, the border areas among these four countries are widely underdeveloped and economically insecure. Their primary sources of livelihood have been livestock husbandry and, to some extent, agriculture. According to a 2008 report, the literacy rate in Wakhan district hardly reaches 5%.

The foremost advantage of building infrastructure in this region would be to bring change in the life and livelihood of the local population. Their access to markets and cities would help them sell their products, get access to education and find alternative sources of income. Regional investment in infrastructure and trade would provide locals with reliable sources of employment, rejuvenating these people’s historical ties to the ancient Silk Road.

Second, connecting the bordering countries and facilitating economic integration through better infrastructure would lead to more stability and security in the region. Better customs controls and the deployment of border guards, as well as control of the illegal cross-border trafficking, would encourage legal exchange and cooperation. Indirectly, the integration of the border areas would strengthen local development and lead to an increase in the economic well-being of the local population, which would lead to more secure and stabilized border regions.

Finally, linking the Wakhan corridor to the Karakorum Highway would provide the shortest route for China to reach its mega projects in Afghanistan, and for the Afghans to access the vast Chinese market. The north-south expansion of the corridor would help landlocked Tajikistan to get access to Pakistan’s ports, allowing the Pakistanis to reach the resource-rich Central Asian republics by traversing Afghanistan through the shortest possible route.

If built, the Wakhan corridor would be the least costly trade route between China, Afghanistan, Tajikistan and Pakistan compared to the current alternatives. This should compel the four countries to transform this land buffer into a bridge between them.

Currently, CPEC benefits Pakistan and China, but it can be easily extended to include Afghanistan and Tajikistan. If the Wakhan route is connected to the CPEC, it would undoubtedly boost trade and transform the economic outlook for the entire region. Political bottlenecks and security fears should not hold back economic progress and regional prosperity. It would be in the best interest of the region as a whole to develop more projects like CPEC and Chabahar, with regional integration and economic cooperation in mind. These mega projects, linked together in good faith, could reinforce and facilitate trade and transit in the region with the lowest possible costs and numerous benefits.