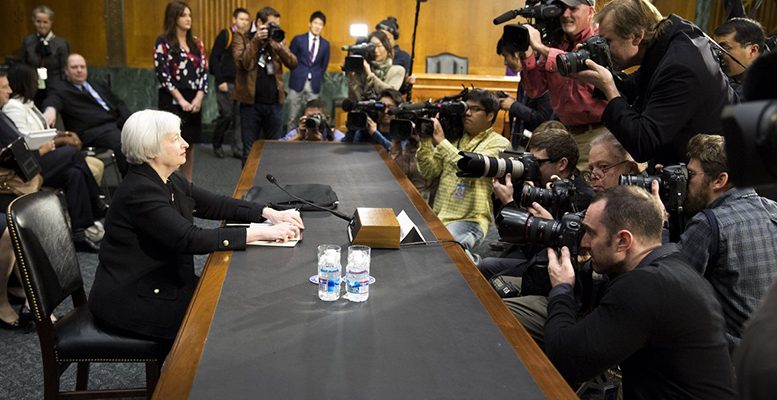 In the good old days, financial and economic observers used to worship Alan Greenspan’s deliveries as if they were Moses’ Tables of the Law. Many even earned their living interpreting his messages. This has no longer been the case since the first moment Janet Yellen took office. Most acknowledge that reading the Fed minutes is tantamount to a sheer waste of time. They provide no clue as to future action, nor any real guidance on the monetary policy the Fed might follow. All we know is that returning to normal conditions is mere wishful thinking.

It is time Janet Yellen and her colleagues make up their mind and deliver something more exciting than the lacklustre literature they provide the markets with on a monthly basis. One gets fed up with the ready-made formula recalling that the Fed will take all appropriate measures should the circumstances warrant. Who could doubt it won’t react to a sharp increase in the inflation rate or a sudden bout of recessionary pressures? What we want to know, and the sooner the better, is the degree of commitment the Fed will demonstrate in hiking rates and reducing the liquidity glut.

Up to now, we have only seen one moderate rate hike last December. A face-saving move, mainly intended to honour the reckless promise made by Ms Yellen early in 2015. Moreover, the Fed implemented the tightening at the worst possible moment when global volatility was running high. From that day, the Fed has reluctantly made vague pledges about future rate stiffening as soon as the necessary conditions concur.

Right now, the US economy’s performance is enviable. Job creation is at peak levels while the dollar has fallen significantly, providing enough arguments for raising federal funds. Nevertheless, the Fed still refuses to give an unmitigated commitment to normalising monetary policy. Observers can only bet on when it will trigger the next move. Some predict it might raise rates in September, while others believe it will not dare to do so before the US presidential elections.

Such bets seem extremely trivial, because the key issue is whether the Fed will revert back to step one of monetary conduct. A step that is only credible if it reduces its balance sheet and wipes out the excessive liquidity that curbs any control over the amount of money in the economy. Normalisation means no more, but definitely no less than that. The Fed cannot claim it is tightening credit when it accompanies rate hikes with a whole range of precautionary measures to preserve liquidity up to the hilt, just as it did in December.