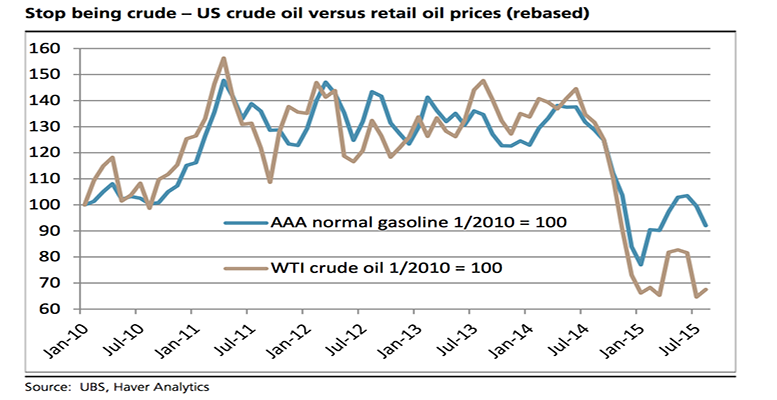 Headline inflation is about to take a significant step up in most of the world’s major economies. Oil prices started their precipitous decline in October 2014, continuing until January 2015.

This means that the effect of lower oil prices on consumer price inflation will exert progressively less of a drag on the year-over-year headline consumer price inflation rate from the October 2015 data onward. This base effect is, in theory, well understood – although economists long ago came to understand that financial market participants do not necessarily have the rationality that is automatically conferred with the granting of an economics degree. It is possible that a deflation psychology lingers in markets today in irrational response to oil base effects.

At the risk of making an obvious point, the fall in crude oil prices is not all there is to the impact of oil on consumer price inflation. Retail oil prices (those which matter to consumers) are not crude. The level of a national currency against the dollar will impact local currency oil prices. For some countries this has been a mitigating factor to disinflationary pressures. In addition, some governments (especially in emerging markets) have used the low oil price as an opportunity to reduce consumer oil subsidies.

These arguments cannot hold in the United States, and yet, as the previous chart shows, US gasoline prices have fallen notably less than crude oil prices. The issue here is primarily labour costs (and to a lesser extent taxes).