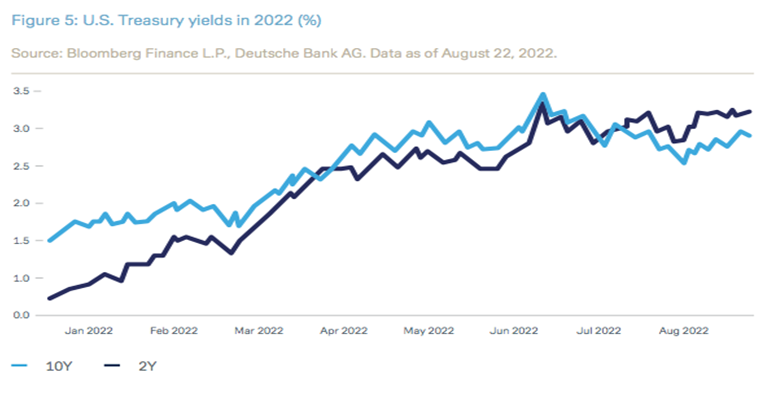 Christian Nolting (Deutsche Bank) | The yield on 10-year U.S. Treasuries peaked in mid-June, then fell sharply in July before rising again in August. The decline for Treasuries with shorter maturities was less pronounced in July, causing the yield curve to invert, which many investors regard as a precursor to recession. We forecast that the U.S. economy will enter a mild recession in H1 2023.

Whereas growth concerns have been the main driver of falling yields, renewed inflation fears have recently sent U.S. Treasury yields rising again. The MOVE index, which measures fixed income volatility, remains elevated despite falling from a historic high in early July. Market expectations of a quick end to the Fed’s tightening cycle and a rate cut next year may prove premature, which could prompt further volatility in government bonds. After the U.S. economy emerges from recession in 2023, longer-term yields on U.S. Treasuries are likely to be higher than their short- term counterparts again.

In the Eurozone, the next six months will be dominated increasingly by recession fears, particularly given the tail risk of Russia ultimately ending all gas exports to the EU. With inflation still high, however, the ECB may well continue to raise its key interest rates. This will lead to higher yields on Bunds, especially those with shorter maturities, as the markets are only pricing in a moderate rate hike path, which could prove to be wrong if inflation remains well above the ECB’s 2% target for a prolonged period. We forecast a mild recession in the Eurozone starting in Q4 2022 and lasting two quarters.

Recent data suggests that U.S. inflation may be peaking and credit market fundamentals are in good shape, partly due to a post-Covid improvement, with the total debt to EBITDA ratio having declined for both investment grade (IG) and high yield (HY) issuers. Similarly, the interest coverage ratio in Q1 2022 (latest available data) was at its highest for IG and HY since 2007 and 2008 respectively. This should make U.S. credit more resilient to the economic slowdown and in 12 months spreads should be recovering, thanks to only a mild recession in H1 2023. However, HY spreads are set to come under pressure, as the default rate is expected to rise from its current low level towards its historical average.

EUR credit spreads have already widened significantly, pricing in much of the economic slowdown expected following the energy crisis and the ECB’s monetary tightening and end to the corporate bond net purchases. Over the next twelve months this pricing is likely to recalibrate, assuming that the recession comes to an end and the region’s energy supply chains have been largely reorganised. The ECB’s new Transmission Protection Instrument opened the door to purchases of private sector securities, if appropriate, which should help sentiment towards EUR credit. While leverage appears to have peaked in Q1 2022, debt servicing capacity remains above its historic 10-year average for both IG and HY. Nonetheless, EUR HY faces a worsening default environment as the share of distressed bonds is currently on the rise.

EM corporate spreads have been driven higher by inflationary pressures and geopolitical uncertainty. We expect some of these risks to recede as sentiment recovers from the latest China/ Taiwan pessimism. Fundamentals (gross leverage, net leverage and interest coverage) are at 10- year highs, which should offset some of the macro uncertainty, especially with regards to China. Defaults have been concentrated in the Chinese property market, but their impact should be limited as the segment now constitutes less than 3% of China’s overall HY market.