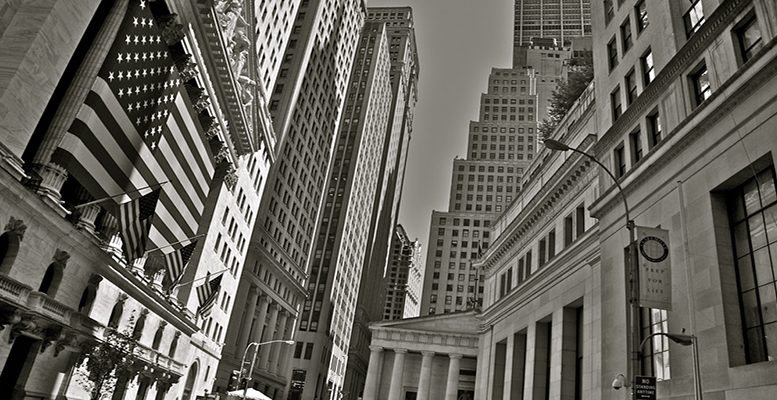 In the period 2009-2018, total US debt fell from its maximum of 350% of GDP in the first quarter of 2009 to 311.5% in the third quarter of 2018. Despite the general deleveraging in the US, the business sector (corporate and non-corporate) has begun to indebt itself again, currently to a level of 72.6% of GDP ($15 trillion). This represents a deviation from the trend of 2 percentage points. Past US recessions have coincided with positive deviations which vary between 2 and 8 percentage points of GDP.

According to calculations of economists at the firm Solunion, the real level of non-financial corporate debt could exceed by 30%, or $3.9 trillion, the official figures, principally because of leveraged loans bought by non-banking entities. They estimate that the debt/Ebitda ratio would therefore be close to 4.6 rather than 3.9.

The Trump Administration’s fiscal stimulus has increased demand in the US over the last two years. According to Solunion’s model, a correction of this excess of demand, and a return to the production growth potential, could trigger an increase in the company bad debt index of 1% in the third quarter of 2018, up to 2.32% (the highest level since the second quarter of 2011).

This adjustment could cause strong disagreement over fiscal policy, in the debate over the 2019-20 budget. Therefore the corporate differentials will remain around 230-240 basis points, although underestimating the hidden debt, but conscious of the risk brewing in the corporate sector.

In a stress scenario (the probability of change is estimated at 35%), which could correspond to a series of non-payments, the bad debt rate could increase to 3% and the credit differentials would quickly increase by 70 base points over current levels.

The corporate differentials are currently underestimated and that unfortunate events, like a rapid slowdown or non-payments in the market, could end up increasing the differential by 70-190 basis points.

And if corporate debt in the US is underestimated?

For at least two years, the IMF and BIS, to name only official institutions, have issued warnings and expressed concern, in their respective Global Financial Stability Reports and Quarterly Reviews, about the quality and quantity of the debt issued by the non-financial corporate sector in the US. To a certain extent, investors have shown themselves cautious about US non-financial corporate debt, as shown in surveys of investors, which increases the credit differentials and the exit of corporate bond funds.

The known data which is analysed in this context is fragmented: unrated debt is effectively outside the scope of study. An investor who limits his risk to highly rated bonds can decide to ignore what happens in the lower rated segments. Similarly, an investor in rated debt could, possibly, not be interested in the trends in unrated debt. However, this silo approach carries the risk of underestimating the potential interdependence between the different segments of the credit market, as well as the possible contagion between the weakest borrowers and the strongest. From Solunion, the analysts say:

“Whether we like it or not, some of the clients and providers of rated debt, they are not even rated. For this reason it is important to evaluate the general indebtedness of the US non-financial corporate sector, even when the investment world limits itself to high rated bonds.

In fact, they think that the question is also relevant to investment in capital, “given that the repurchase of shares is to a large extent financed by the issue of corporate debt.”

The official data is the starting point for this exercise, but not necessarily the end point: the official levels of debt should be collated with other data; the possible inconsistencies should be used to improve the quality of the global evaluation. If such inconsistencies exist in the US non-financial corporate debt, it would suggest that the true level of debt could be significantly higher that the official figures.

According to the Federal Reserve, the index of debt to EBITDA of the US non-financial corporate sector is 3.9. But, since the great financial crisis, the index of net interest to EBITDA has remained significantly higher (4 percentage points or 60%), the level consistent with both market interest rates, approximated for the performance of BAA bonds, and the level of debt officially reported. As the market interest rate is directly observable, such an anomaly can only be explained if the real level of debt is higher than that reported.

The most plausible reason for this under-estimation can be found in the securitisation of leveraged debt and its purchase by non-bank entities, a market segment which has become larger than the junk bond market. The statistical machinery generally does not take account of financial innovation. For the relationship of net interest to EBITDA be reconciled with the performance of BAA bonds and the level of corporate debt, this latter must be some 30% higher than reported. If so, the proportion of debt to EBITDA would be close to 4.6 rather than 3.9.

As is to be expected, the indebtedness and credit risk premium tend to move in the same direction: the larger the debt/EBITDA relationship, the greater the margin between the performance of BAA bonds and the bonds of the US Treasury. To the point of a constant, the risk premium of credit is proportional to indebtedness. In other words, for an index of debt to EBITDA of around 4.6, the differential for BAA bonds should be around 120 base points higher than it is. Curiously, after adjusting corporate debt to be more coherent with the net interest to EBITDA ratio, the model’s estimation is closer to the real differential than without the adjustment. A debt to EBITDA ratio around 5 is high by historical standards. In recent history, this level was reached in 2001 and 2009, close to the trough of the economic cycle, in other words following recessions that had reduced the EBITDA. Put another way, it is unusual for this ratio to be so high during an expansion. Private providers of share indices and financial data confirm that the debt to EBITDA ratio is at a level generally only found in recessions.

As the two sources of underestimation in US corporate indebtedness differ, the experts at Solunion blame the possible change in the height of differentials, as a result of a significant correction in the credit market. Therefore, there is an upward potential of 190 basis points for the credit differentials for US non-financial companies in this case.

There is a high probability that the liquidity conditions in this market have been altered significantly by the appearance of new types of products and actors (mutual funds feel themselves attracted by higher returns in an era of low returns).

In a typical case, any non-compliance by a major company in the world of investment rating (systemic for the credit market) could generate a domino effect and trigger a fall of a large number of companies with BBB rating, possibly pushing them into junk bond status. In these circumstance, many mutual funds would be compelled to sell for strictly regulatory reasons, which would threaten liquidity and could provoke a massive sell-off in the US credit market as a whole.