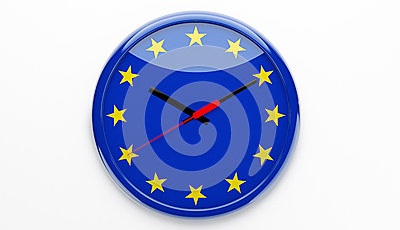 By Luis Arroyo, in Madrid | In this excellent analysis, Tim Duy forecasts a moderate but continued 2 percent GDP growth rate for the US unless global risks drag it down. But the debate over there seems to turn around what else could have been done to fill the gap the breaks open in 2008, as it clearly appears in the chart, between actual and potential real GDP.

The dilemma, in short, is whether the credit crunch has had an unstoppable impact on the country’s economy or whether the monetary policies should have been more ambitious.

To European ears, of course, this is a debate for the selfish and the spoiled. While the US complain about their very slow recovery and the not-yet-improving labour market, the euro zone drops in free-fall mode towards hell. Now, in my view, the talk about potential GDP and other Byzantine, time-consuming questions belongs to the academia’s sweet tooth for abstruse, little details.

The problem, in my opinion, is indebtedness or rather the lack of capacity to reverse the trend. When financial data doesn’t fit in economics models, some economists tend to leave them aside. They do so at their own peril. The US, as you can see, has only just begun to decrease its debt levels and it is not doing enough.

Let me add that in the euro zone, we are miles away from the US… in the wrong direction. Our institutions have demonstrated that they are incompetent, inefficient and particularly stubborn: compare the Federal Reserve’s and the European Central Bank’s moves and then the results. I do not think I’m being too harsh with governor Mario Draghi. Indeed, for all the fighting between those who think more inflation in the US wouldn’t hurt the return to higher growth rates, and those who want the congress to impose controls over the Fed, the most imminent threat to the US is us.

A euro implosion would dynamite the fragile economic standing of the world. In the euro zone’s news media, especially the Spanish media, few voices dare to say that the euro isn’t irreversible. On the contrary, supposedly high-brow newspapers repeat without remorse that the common currency union is here to stay for ever. But to reinforce this myth is immoral. Because the euro zone as it is now pushes us towards our own destruction.

The European Union looks as a pile of dead institutions that cannot represent what they state they do and, instead, have made our differences and grudges larger. Mistrust and stereotyping between south and north have expanded throughout the Union and positions have become more inflexible. This cannot be the seeds of our future together.