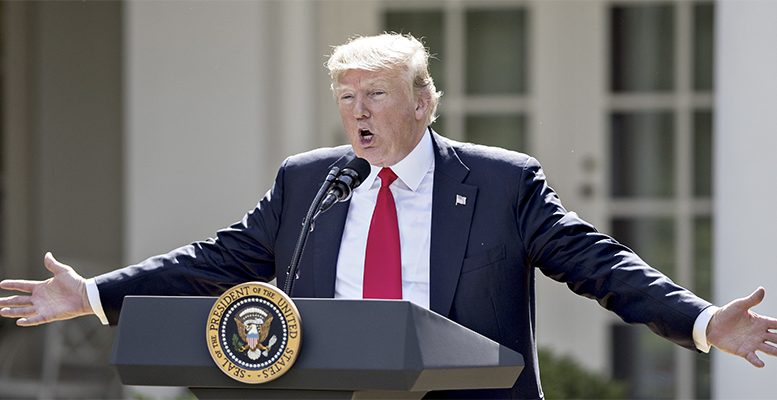 Trump’s rejection of the Paris climate agreement will have few substantial consequences as regards promoting home-made pollution. On the other hand, it may deter emerging economies, such as India, from delivering on their commitments in exchange for money, unless Europe foots the bill.

Let’s face it – the US was never engaged wholeheartedly in the crusade against climate change. Obama had to use his presidential clout to overcome fierce opposition from legislators very much influenced by the powerful energy lobby. His main achievement was a ban on new coal power plants responsible for high emission levels.

Mr Trump’s argument about securing jobs in the declining coal industry seems completely flawed. Production has shrunk by 50% over the last few years, dislodged by fierce competition from natural gas. Market conditions have driven both the rise and fall of the coal industry, government action having no visible impact. Besides, coal jobs total less than 60,000, a mere drop in the ocean in the US labour market.

Undoubtedly, Mr Trump’s move is aimed at boosting his weakened authority, badly damaged by the Russian affair, successive fiascos and a dismal handling of government. He is keen to deliver on the reckless promises he generously offered to bemused voters during the bitter electoral contest. Little does he care if his climate change negationism means joining Syria and Nicaragua in the lacklustre club of countries rejecting the Paris agreement. It seems that far from embarrassing Trump, losing the US’ leadership in key global policies matches his islationist views.

His bruising efforts to put America First will ultimately lead to the unravelling of any US influence on world affairs. Threatening his closest partners with trade wars, disengaging from long-time pledges to secure regional protection against intrusive action by other super powers, erodes all confidence in the US. The new global disorder fuelled by Mr Trump’s reckless stance will severely undermine the US leadership and lead to an unstable scenario ruled by the law of the jungle.

Europe alone could possibly salvage the remnants of democratic and social values, putting up a wall against international bullying and rampant nationalism. But it must show beforehand that it has the ability to overcome its current shortcomings in governance and internal solidarity. Otherwise, peace and prosperity will face rough times ahead.