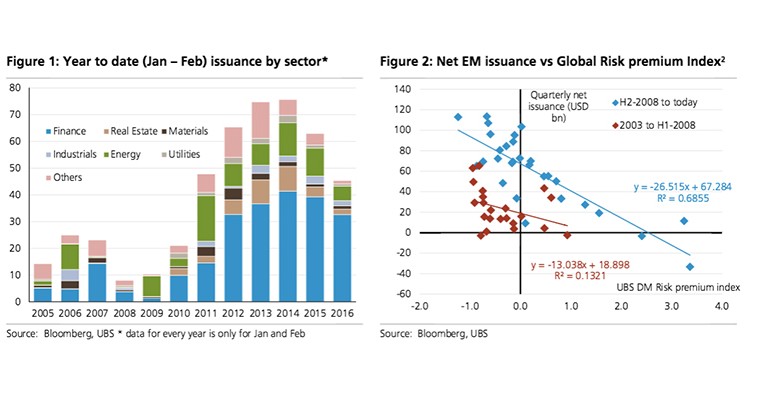 UBS | Between 2010 and 2014 global investors showed tremendous generosity towards EM, helping it issue forever larger amounts, and easily roll over debt coming due. In 2015 sentiment began to sour, and the primary market is even less benign today. That’s a case of bad timing because the debt maturity wall has grown significantly.

Where are the refinancing pressures the highest?

We take a detailed look by country and sector on where refinancing costs are the highest. In looking at hard currency debt coming due we are focussing here only on a subset of external debt. We view the amounts coming due in the context of FX reserves and net international investment positions and find that Turkey, South Africa, Russia, Indonesia and Mexico have the least comfortable profiles. China does not come up as a risk. Local debt problems in China are another matter, but China does not have a BoP issue on external maturities. That is why we have thought that the Renminbi is an inelegant way to play China’s challenges.

By sector, financials account for the most significant proportion of debt coming due. Again, this is so at a time when we believe we likely have a long NPL cycle ahead of us. We have argued that financials are the key link in the chain of pressure transmitting from corporates to governments, and looping back into corporates. We describe how and why the link between credit and equity is tighter in EM than in DM.