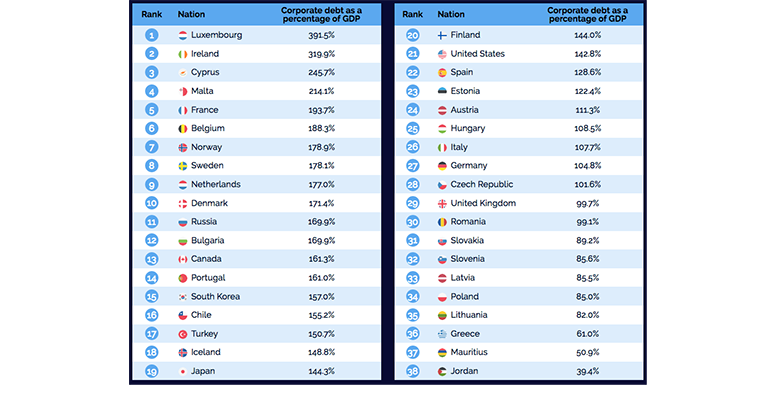 Every country has debt in many forms, such as: public debt, personal private debt, and of course corporate debt. To judge the level of the country’s corporate debt, we have looked at the corporate debt as a percentage of the nation’s GDP.

Countries with the most corporate debt

1- Luxembourg has the highest amount of corporate debt, totalling almost 400% of its GDP. One of the reasons for this is that Luxembourg has around 17,000 corporations registered per square kilometre of the tiny nation, therefore there is a high level of corporate money and debt compared to GDP. Luxembourg is generally a rich country with one the highest GDPs per capita of any country in the world.

2- Ireland had the second-highest level of corporate debt, and the Emerald Isle is the only other country with corporate debt levels of more than 300% of its GDP. In fact, the Irish total is around 175% higher than the average of all the countries we studied. Ireland is a European home to many global tech firms such as Apple, Google, and Microsoft.

3- Another small island state comes in third in the rankings, and although Cyprus has a very different climate, it does have a similarly high level of corporate debt to Ireland. In fact, its debt is just under 250% of the GDP of the country. Although Cyprus is not officially a tax haven, it does offer companies benefits that other European countries do not, and consequently, there are a large number of corporations in the country.

4- The minuscule Mediterranean island of Malta has the fourth-highest amount of corporate debt in relation to its GDP. Maltese based companies pay the lowest tax on profits anywhere in the European Union, and consequently, it is very attractive to large multinational companies. Similarly to Luxembourg, because Malta is so small it only has the 129th largest GDP in the world according to the World Bank, and this combined with a high number of companies makes it easy for corporate debt to outweigh it.

5- By far the largest nation in terms of size, population, and world stature in the top five of the rankings is France. French corporate debt is equal to 194% of its GDP, and although it is below the 200% mark, the rate is still the fifth highest in the world. This level is incredible considering that France has the seventh-largest GDP of any country in the world and to put this into comparison the UK (which has a similar level economy) has corporate debt levels under 100% of its GDP.

The corporate sectors with the most debt

While we have established that corporate debt is rife around the world, which corporate sectors contribute the most to this debt? By looking at data from the United States (the largest economy in the world) we can see which sectors have the highest levels of debt. Overall the US has a corporate debt level of 142.79% of its estimated GDP of $21.43 trillion, which ranks them as the 21st highest nation.

The sector’s level of debt was ranked by their debt to capital percentage; this is calculated by dividing all of the industries’ interest-bearing debt and then dividing it by the total capital (cash and assets) and then converted to a percentage figure.

2-The tobacco industry has been struggling in recent years as far fewer people in younger generations are smoking. Moreover, inflated taxes and advertising bans have hurt the tobacco companies ability to sell their products. This has resulted in a debt percentage of 110%.