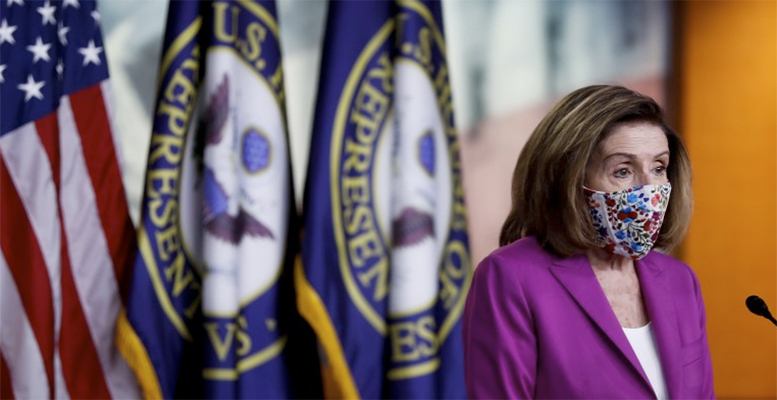 Peter Isackson | Along with Vice President Mike Pence, House Speaker Nancy Pelosi was one of the politicians most directly concerned by last week’s assault on Congress. Her own office was ravaged. The marauders sought her whereabouts as she was being evacuated. Assessing the damage in the aftermath of the mayhem, Pelosi could begin to comprehend the truly evil intent of the insurrectionists. On Sunday, she described the invasion of the Capitol as the work of “a well-planned, organized group with leadership and guidance and direction. And the direction was to go get people.”

We now know that she was a prime target alongside Pence, whom the crowd was seeking to lynch. In other words, it wasn’t a protest or an occupation, but a potentially murderous assault on lawmakers.

Most analysts focused on the rioters themselves and the link with President Donald Trump, who commanded the crowd to gather at the Capitol and prepare for a fight. Pelosi peered further into the evil plot, demonstrating an investigative acuity worthy of Sherlock Holmes. Not only did she connect the threads dangling for the past four years inside the brains of prominent Democrats — a list that includes Adam Schiff, Chuck Schumer and herself — her far-sighted global perspicacity bore its most compelling fruit when she identified the Moriarty of the tale, the hidden ringleader no one in Washington or the media dared mention, but only she could suspect: Vladimir Putin.

On her congressional website, Pelosi laid out in detail her impeccable logic: “And the message that it sent to the world, a complete tool of Putin, this President is. Putin’s goal was to diminish the role of — the view of democracy in the world. That’s what he has been about. And, again, his enabler has been Donald Trump for a long time.”

On her website, Pelosi added a few more details to cement her claim: “That’s why I said in that photo when I’m leaving his meeting, ‘With you, Mr. President, all roads lead to Putin.’ Putin wants to undermine democracy.  That’s what he’s about domestically and internationally. And the President gave him the biggest of all of his many gifts to Putin, the biggest gift, yesterday.”

If politics, especially in Washington, has become incorrigibly hyperreal, there are times when, thanks to voices like Pelosi’s, it also becomes surreal. Many members of last week’s mob were agitated by their quasi-religious belief in the conspiratorial ravings of QAnon. All were motivated by the belief that President Trump had charged them with a mission to restore order (by creating disorder). Inside the building were people like Pelosi, Schiff and Schumer, who have long been entertaining their own conspiracy theory. Four years on, that repeated mantra known as Russiagate has come to resemble a mental disorder.

As a significant segment of the American population was intent on demonstrating not just “who we are” (Joe Biden’s expressed concern) but “how we think” (irrationally) and “how we behave” (rowdily), Pelosi was turning the investigation of a crime into a casus belli, a call for war with Russia. This suggests that the soon-to-be-enthroned Biden administration, well stocked with militaristic hawks, may be tempted to be the tail that wags the dog, promoting a costly and risky new Cold War leveled not against Trump’s declared enemies, Iran and Venezuela, but against the nation whose economy and system of oligarchy was put in place and managed by American advisers, consultants and spies.

Donald Trump’s seditious criminal actions last week should not be understated. Though Republicans deny the gravity of Trump’s role, AP correctly describes it in these terms: “The mob got explicit marching orders from Trump and still more encouragement from the president’s men.” The article quotes Trump lawyer Rudy Giuliani’s exhortation, “Let’s have trial by combat.” It mentions the active role former Trump associate Roger Stone and National Security Adviser Michael Flynn played in instructing the crowds to fight “a battle between good and evil.”

Pelosi’s fantasy that Donald Trump’s motives boiled down to fulfilling Putin’s designs clearly belongs to the realm of conspiracy theories. That Russian or Chinese leaders might have a feeling of schadenfreude as they watched the events unfold would surprise no one. But hinting at a causal connection is not just irresponsible but a symptom of psychosis. Does the 25th Amendment apply to the speaker of the House? If American voters are condemned to selecting which of the two parties’ conspiracy theories they prefer as the basis of the policy they will be governed by, it is fair to say that the decline of US democracy is nearly complete.

The richly diplomaed Democrats at the highest level of national politics know for a fact that Russia is no longer the communist Soviet Union. But they also appear to believe that the Americans who vote for them haven’t yet caught up with the news. The occasional Freudian slip made even by people in the intelligence community reveals that Americans are still prone to categorizing Russia as the ideological enemy of the US. The reflexes spread through the media for half a century during the Cold War still exist. Politicians who see the advantage of appealing to those reflexes will not hesitate to do so.

Every administration since the end of World War II has required the existence of a stable enemy that the media could highlight and instill in people’s minds as the principal threat to the integrity of US democracy, if only to justify the increasingly bloated military budget. This has never been more true than over the past two decades, in which the amount spent by the Pentagon has in reality — when something called “adjustments” are taken into account — consistently exceeded by as much as a multiple of three the allocated budget.

This week, in an interview with Lee Camp, the economist Mark Skidmore explained how the audit he conducted with Laurence Kotlikoff revealed that over a 15-year period, the Defense Department had effectively spent $21 trillion that appeared in its accounts in the category of adjustments.

Kotlikoff admitted that the team of auditors was “left with having to decide whether or not we ‘trust’ that government authorities are sharing accurate information.” He added that “Greater transparency is needed to re-establish public trust. Instead, we are blocked from accessing any further information.”

Given this betrayal of trust, should anyone be surprised that large segments of the US population refuse to believe the statistics presented to them by the government and the media? The rioters on Capitol Hill knew nothing about the scandal of the Pentagon’s true budget. They believed, thanks to Trump’s lies, that the election had been rigged. But their action reflects a more general breakdown in the trust Americans now have in their institutions.

If the real budget of the Pentagon is closer to $2 trillion than to the $740 billion voted on at the end of December, it would be true to say that Congress and the House majority leader, Nancy Pelosi, have been playing the role of “enabler” of a monumental fraud that has consequences far beyond the dickering of the two parties over fictional budgets. The true accounting gives us an idea of the real cost of a military presence across the entire globe. The Pentagon’s figures dwarf the amounts allocated to social needs. It isn’t only about dollars, but about trust. The US now has no choice but to see enemies everywhere, which means paranoia has become the norm.

As the Trump White House gives way to the Biden regime and new questions of how many trillions of dollars will be required for a new stimulus, the population will be expecting a new transparency based on something that reflects tangible reality rather than fictional plots. Every new administration promises to rebuild public trust. Trump said he would clear the swamp but simply made the air around it poisonous. Building trust is easier to accomplish when leaders agree to rid themselves of their dependence on paranoid delusions.