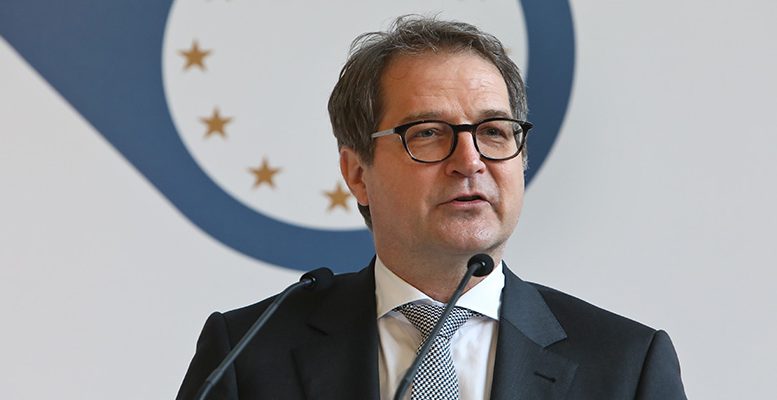 Volker Wieland (1966, Aalen, Germany) is Professor of Monetary Economics in the Goethe University in Frankfurt. Since 2013 he has been one of the five members of the German Government´s Council of Economic Experts. In recent years the Council, a body independent of the Government, has criticized the monetary policy of the ECB and has called for an end to the purchase of debt.

Q: The Social Democrat Olaf Scholz, Merkel´s Minister of Finance in this legislature is not thinking of changing his predecessor´s objective of budgetary balance. Despite the German consensus on the principle of not spending more than you earn, Scholz has been much criticised.

A: Yes … it´s that the German economy is growing strongly and, as a consequence, the state is enjoying a budgetary surplus. However, this privileged financial situation will not last long. In 2017 the excess , the positive difference between income and spending, was 38.4 billion Euros, 1.2% of GDP. And by 2019 public debt will be just below the 60% of GDP established by the Maastricht convergence criteria. But the stability pact is pro-cyclical and is correct … so in the good times you have to reduce the debt so as to have a margin for manoeuvre in the future. In crises the deficit and debt increase again. I am convinced that it is important to continue with the budgetary balance policy, above all taking into account contrary factors, like interest rates, which are going to rise, and the demographic evolution. The ageing population represents a major fiscal challenge. In conclusion, the money the Government has at its disposal now will have to be spent on reforms to ensure growth, on measures to increase the economic potential.

A: How far can cooperation between France and Germany on EU reform really go?

B: In his speech to the Sorbonne in Paris, Emmanuel Macron laid out an ambitious plan to advance european integration and listed a series of proposals to consolidate cooperation in the EU which we must take seriously. Above all on migration, security and defence policies, as well as how to confront major challenges like energy and the climate, it would be desirable to work together to secure common objectives, that would also help counteract part of the popular frustration with the EU.

As far as monetary union, the French President only repeated old French récipes, like the election of a European super-minister of Finance, or an additional common Euro Budget, a “European fiscal capacity”. But the problems will not be solved in this way. A European finance minister would not be able to control French finances, or those of any other country. The member states are, by the general wish of the voters, sovereign in budgetary policy. For this reason, each country should manage well its accounts, and take responsibility for its debts. If there is a crisis, the European stability mechanism already exists. A common budget would only be the gateway to unconditional transfers and credits. This would reinforce the centrifugal forces in the Eurozone.

Q: What would you propose?

A: The European institutions should focus their efforts on emphasising individual responsibility. Including the obligation for credit entities to adequately cover the purchase of public debt with their own capital and funds in the banking regulation would contribute to this. In future we must also avoid chaotic restructuring of public debt, like in Greece. This requires a normative framework for the orderly resolution of such processes, combined with the European Stability Mechanism. It would mean converting the existing European Stability Mechanism into a European Assistance Mechanism. We can call it that. The council has made concrete proposals. The transfer of resources from the south to the north and east of Germany has not caused problems in this country.

Q: Do you think the Eurozone can exist without a system of transfers?

A: Germany is a federal state. Our constitution says that all the federated states should enjoy a similar living standard. Because of that there is a major redistribution of resources. Some federated states contribute to finance the budgets of other Länder. And what do we observe? Well that the states that receive money from the richer regions do not grow more. On the contrary, the experience is that the differences between those who pay and those who receive are consolidated. That´s why this system does not operate in Europe. As far as the US, the states are constitutionally obliged to manage balanced budgets. There the regional differences and risks are counter-balanced by labour and capital market mobility, and, the counter-balance of risk, through the financial markets. This is why in Europe we must move forward with the union of capital markets and facilitate greater capital and labour mobility in the EU.

Q: And the difference in economic competitivity with other countries?

A: Economic competitivity is the decisive factor. In recent years the member states of the Eurozone have implemented structural reforms, including labour market reform. If we compare Spain and Italy, we see that Spain has embarked on a very tough road, but its economy has begun growing strongly again. By contrast, Italy has suffered a sharp fall in GDP per capita since the beginning of the crisis and remains below the level reached in 2000. Should Spain transfer money to Italy over a long period to improve its economic situation? I don’t think so. It is the Italian government that needs to reform not only its labour market but also its legal system and other important areas in the administration to increase the competitivity of its economy and create employment.

Q: The German economy depends on exports to the rest of the world. It is true that Germans pay more than they receive in the EU budget, but that is not how the value of the EU is measured. What are the limits of solidarity between stronger and weaker countries in the Eurozone?

A: Being the leader in exports is not an end in itself. The other side of elevated levels of exports of goods and services are growing quantities owed. In other words, in this way Germany invests a great deal abroad. If that is right or not must be decided by the actors involved, that´s to say the companies and the consumers. Is it worth the effort? That we will see in the future. What is relevant for economic policy is whether the growth is sustainable and whether the economy can adapt to new demands ( eg the digital revolution) without increasing unemployment.