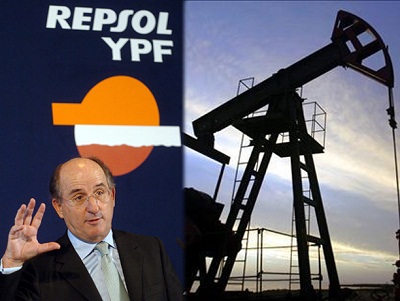 By Julia Pastor, in Madrid | Repsol YPF’s petrol deposit finding in Vaca Muerta (Argetina) seems to have no end. An external audit commissioned by the company revealed that the reserves of unconventional oil (shale oil/gas) exceed initial expectations and increase to no more no less than an equivalent 22,807 million oil barrels, which according to the newspaper Negocio would mean a sixfold increase in the company’s reserves.

Spanish analysts agree that the data is good for the company and also for Argentina. According to Sabadell Borsa,

“the new figures strongly support YPF’s project that involves huge investments in the country. Vaca Muerta corresponds to €2.71/share of our valuation.”

At Banesto, experts note that

“with these results, to date, Argentina has the opportunity to replicate the unconventional oil revolutionary effect experienced by the United States through the massive development of the resources of the area.”

So, this is how the financial newspaper Negocio reported the news.

“Repsol YPF increased its forecast for resources and reserves of its unconventional oil (shale oil and shale gas) discovery in Vaca Muerta to 22,807 million barrels of oil, of which 13,703 are from the Spanish-Argentinian oil company.

“The company, chaired by Antonio Brufau, received the assessment carried out by the international auditor for oil reserves and resources Ryder Scott that meets the formal criteria required by the National Securities Commission of Argentina and the U.S. Securities and Exchange Commission (SEC).

“According to the oil company itself and Ryder Scott, it is estimated that the Vaca Muerta formation extends over a total area of 30,000 km2, of which YPF has a net equity of about 12,000 km2. The first results indicate that 77% of its area would be oil and the rest would be divided between wet gas and dry gas. The studies have found that in an area of 1,100 km2 the estimate of contingent resources (resources that have already been drilled) is of 1,115 million oil barrels and 410 million of gas.

“Here is some data that might shed some further light on the impact of the new oil findings: Repsol’s world reserves, including YPF, until December 2010 were of 2,000 million barrels. Now, it is possible that Repsol’s reserves be multiplied by six.

“The development of the area delineated by YPF, 1,100 km2, could enable a 50% increase in current oil production in Argentina. According to calculations made by the company, it would be necessary to undertake an investment plan that would involve $28 billion in the next few years to make 2,000 productive oil wells which would require 60 oil rigs, in addition to the ones already existing in the country.

“If the exploration of the Vaca Muerta formation were successful and an intensive development of the area were to begin immediately, in 10 years’ time Argentina could double its current oil production. This would require the investment of $25 billion each year.”

Be the first to comment on "Vaca Muerta, the sixfold increase of Repsol’s reserves"