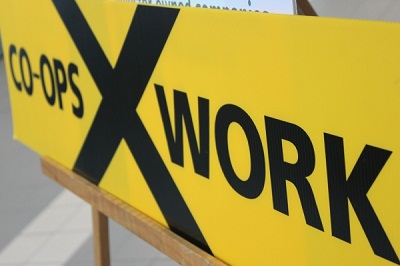 That speech by GOP candidate Mitt Romney stirred a huge debate about the role of corporations in the US society. The Occupy Wall Street movement highly distrusted firms. Were they exaggerating? Do companies need to harm the public interest when future profits and/or their survival depends upon it? And, eventually, can the government protect the public interest from corporate anti-social behavior? Does it really make sense to be loyal to a corporation?

This concerns mostly large, for-profit, publicly owned corporations. But there are other firms in America that actually ARE people, since they fully operate for the benefit of its members and are controlled by these members: nearly 30,000 U.S. cooperatives that operate at 73,000 places of business throughout the U.S. These cooperatives own more than $3 trillion in assets, and generate over $500 billion in revenue and $25 billion in wages. The estimates are that cooperatives account for nearly $654 billion in revenue, over two million jobs, $75 billion in wages and benefits paid, and a total of $133.5 billion in value-added income (figures by the Cooperative Development Foundation).

The vast majority of cooperatives exist in the agricultural sector across the country, with the greatest concentrations in the Northeast, the West Coast and the Upper Midwest. The majority are small businesses, with between 5 and 50 workers, but there are a few notable larger enterprises. Many are concentrated in the retail and service sectors. Traditionally there has been a strong cooperative presence in natural foods grocery stores and bakeries. In the past ten years, some are growing in the technology sector, home health care, and housekeeping, according to The US Federation of Worker Cooperatives. It is difficult to extract the exact number of co-op workers though, because many individuals are members of more than one.

HOW DO THEY WORK?

In many ways, just like conventional businesses: developing a product or service and selling to the public, with the goal of making money. They incorporate with the state, get a business license, pay state and federal taxes, have payroll and benefits, like all business do. However, as the Worker Cooperatives Federation states, they tend to create long term stable jobs, have sustainable business practices, and be connected and accountable to their community. Some worker cooperatives have what’s called a “multiple bottom line” -that is, they evaluate their success by looking not just at the money they make, but at things like their sustainability as a business, their contribution to the community, and the happiness and longevity of their workers.

The University of Wisconsin Center for Cooperatives and the Department of Agricultural has measured aggregate impacts of cooperatives by sector. You can download the PDF here.

TOWARDS A HYBRID SYSTEM

In an op-ed piece in the New York Times, professor of political economy at the University of Maryland Gar Alperovitz, explained that a number of US states are now involved in providing venture capital to privately held enterprises.

“Something different from both traditional capitalism and socialism, without anyone even noticing,” he says.

“There are lots of interesting possibilities along the capitalism-socialism spectrum. It’s not a digital, ones and zeros, this-or-that choice.  We can create (and actually have created and continue to create) a political and financial hybrid that takes the best of both capitalism and socialism, and mitigates the potential excesses and difficulties of both. If we resist the tendency  to demonize either system [capitalism and socialism], I believe we can apply our legendary American ingenuity to creating a new approach that combines the best of both systems,” she reckons.

Would this mix be possible in nowadays America? Feel free to share your comments.

Be the first to comment on "Working co-ops: for some, US hybrid dream"