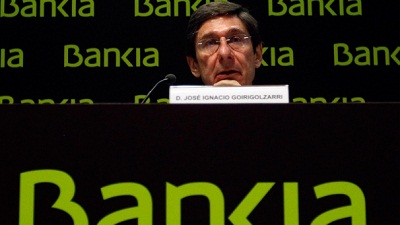 MADRID | A few weeks ago, the Spanish government adamantly denied any hint on disbursing a single penny in banking sector support. A few days ago, it acknowledged the necessity to do just the opposite for anchoring ailing entities. In a desperate face saving attempt it discarded such a funding might lead to open aid, support being provided at a punitive 10% interest rate. But BANKIA discomfiture has led to a sweeping U-turn in this stingy stance. It is now ready to inject a staggering 2% of GDP amount to avoid the worst from happening. As most of this money is meant to cover losses, deficit figure will swell accordingly for all the creative national accounting likely to be devised.

Protecting 10 million clients is the official excuse for behaving in such a profligate way. But generosity will also cover creditors and subordinated capital holders, both escaping the brunt totally unscathed. Even shareholders will not be invited to do away with their money or preferential rights in fresh own resources issues, their potential penalty stemming from dilution when the €19 billion State capital injection takes place. In sharp contrast with interventions undertaken elsewhere, no guarantee is foreseen for public rescue funds. The basic principle of risk taking leading to potential losses thus becomes severely undermined by the BANKIA bail out.

The newly appointed chairman claims to have put the entity back on track. In fact, he has exposed hidden €4.6 billion losses in the yearly 2011 accounts and has reassessed requirements stemming from the financial reform plans, rising the extra provisioning by 2/3 to €7.1 billion. Additional clean-up in non-real estate portfolio amounting to €5.5 billion will be financed by public resources. You don’t need much expertise in asking taxpayers to foot the bill of real and potential losses. As the government has already caved in to such demands, the only hope to avoid providing BANKIA with an undue competitive edge lies now in the European Commission State aid examination.

But the most worrying fact is the sheer size of the artificially sound assets (€13 billion) disguised through bad loan refinancing and other dubious devices. Failure to enforce a prudent pricing and provisioning policy lies at the root of the sharp current disarray. Such blatant deviations cast serious doubts on Bank of Spain supervision and auditing controls. When a prominent Spanish entity is able to mask its shortcomings for so long, investors have god reasons to show open disbelief on others accounts.

This credibility gap will shatter confidence on the financial system as a whole, curtailing its access to money markets. No one will take at face value the close scrutiny to be undertaken by independent firms unless it discloses considerable extra holes.

At the end of the day, escaping from a full-fledged European intervention will prove a most difficult task. Additional needs short of a minimum threshold would be regarded as unrealistic by markets. However, substantial extra needs will put pressure on sovereign debt triggering a two-way contagion. Sooner or later, Spain will be forced to tap rescue funds to put on a sound basis its financial system. Any delay in taking that step before the situation spins out of control would only impose a harsher adjustment in future.