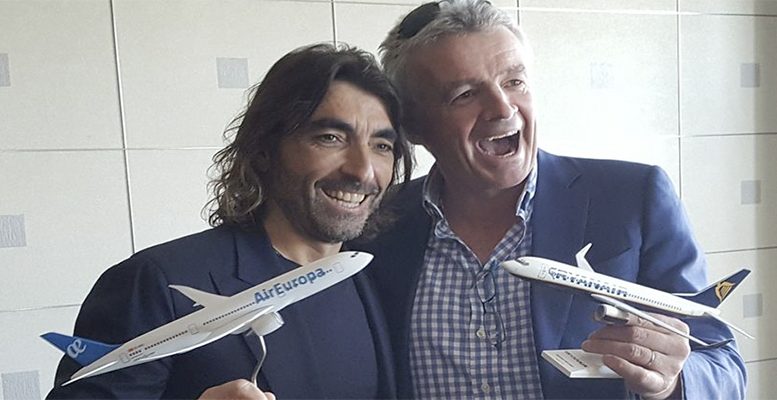 Ryanair to partner with Air Europa

Air Europa and Ryanair have formed an alliance under the terms of which the former will supply the latter’s long haul flights. Following the agreement, Ryanair’s website will sell the flights the Spanish airline offers from Madrid to 20 destinations in 16 countries in America. This is a market where Iberia – a subsidiary of IAG – is the traditional leader, but where Air Europa has grown strongly over the last few years.

At the end of 2017, the alliance will become closer and both companies will coordinate their timetables and offer one ticket. The idea is that Ryanair will use its planes to connect 53 cities in Europe with Air Europa’s 20 American destinations which the Spanish airline operates out of its Madrid hub and viceversa. This will allow Air Europa to quickly boost its passenger numbers in Barajas airport, becoming a leader along with the Irish airline.

In exchange for offering its 130 million clients Air Europa flights, Ryanair will also receive a commission per each sale.

The agreement will prejudice Iberia, given that Madrid’s Barajas airport plays a very important role in terms of filling up transoceanic flights, particularly to Latin America. Now the competition for winning these clients will heat up. According to ACF analysts:

Currently, Iberia has 45% of the passenger traffic at Barajas, while Air Europa and Rynair each have a 15% market share. So the plan is to exceed IAG’s market share between the two of them.

In fact, the European-American corridor has been led historically by Iberia, but low cost companies are taking over the transoceanic flights. Initially they are being operated by Norwegian Air and Level (an IAG subsidiary which will make its debut in June).

For Bankinter experts, this new scenario could lead to a price war which will put pressure on the airlines’ margins.

Furthermore, Ryanair should seen an improvement in revenues -Air Europa will pay it a commission -,  increase its occupancy rate (95% in Dec’16) and break into the segment of low cost long-haul flights. (This is after unsuccessful talks with IAG’s Aer Lingus and Norwegian). Air Europa will be able to cut its costs as a result of the alliance, quickly extend its network (incorporating Ryanair’s 53 European destinations) and gain access to a market with a lot of potential hand-in-hand with the leader in Europe.