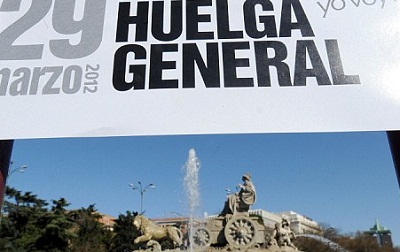 NEW YORK | US media coverage of Spanish general strike was scarce in the morning, and increased during the day, never making the biggest headline.

The online edition of major generalist or business newspaper didn’t include it among their main subjects, or did only briefly. NYT kept it in a low position.  WSJ reported on it only on its World section, and the strike wasn’t even the leading headline there. News agencies like Bloomberg didn’t devote much space either.

Business network CNBC started reporting it early in the morning, with some pictures of the police confronting protesters to protect a bus. Their reporter at Madrid’s stock exchange showed on screen one of the labour union banners

“They want to get rid of everything [every labour right].”

An analyst there said youth unemployment in Spain was scarily high. They tend to relate the strike more with the austerity, maybe because the automatic relation to Greece, than with the actual labour market reform.

Market Watch, a well renowned online media among brokers and investors, gave ample space for the coverage of the Spanish protest. They even had a slideshow with pictures of the protest.

All of those media were highlighting that the strike wasn’t helping getting down Spanish and Italian bonds yields. Dow Jones wrote:

“Growing nervousness ahead of the Spanish budget is largely behind the moves but the selloff isn’t especially large, a London-based trader said.  “The Spanish strike certainly isn’t helping sentiment, but I think it’s just range-trading,” he said. Traders noted that some investors were selling peripheral debt to lock in profits with the first quarter of the year drawing to a close.”

Associated Press pointed out that

“Concerns about Spain’s economy pushed the dollar higher against the euro Thursday.”

In their reporting, the Wall Street Journal pointed out that “Spain Strike Challenges Austerity”, not mentioning the labour reform causing the strike in the headline.

“The strike, called by the two largest unions in the country, is the first clear challenge to Prime Minister Mariano Rajoy’s austerity and reform drive.”

Most of the attention was on this Friday’s Mariano Rajoy budget proposal, which is expected to contain about $26 billion in additional spending cuts and tax increases to help Spain meet deficit targets it agreed to with the European Commission.

“Rajoy’s budget seeks to buy time for Spain,” wrote MarketWatch. “As Spanish Prime Minister Mariano Rajoy unveils his 2012 budget later this week, observers say he may buy some time in financial markets, but still faces what could be the most difficult year yet for the country’s embattled economy.”