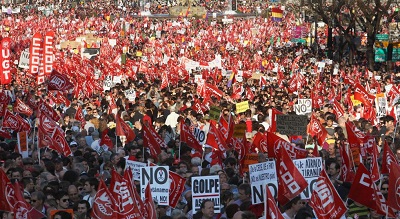 On March 29 at midday, while those joining the nation-wide protest in Madrid celebrated that a major store like Cortefiel had begun to close its doors, electricity demand recorded an almost imperceptible 1.5pc shorter fall that the 17.5% drop caused by the last general strike seen in the country, back in September.

Having it had no discernible impact then, it seems rather logical to assume that this one will not leave any footprint either. In fact, later during this Thursday things wouldn’t improve much for the labour unions.

It could be argued that a general strike must halt a country to fulfil its grand historic role, as much as its immediate use. That is why it is an impossible bet to make in the twenty-first century, difficult to manage even when the turnout figures are relatively successful.

The very nature of the general strike is simple, neat, and belongs to a time in which the force of the masses was somehow meaningful. As meaningful as a domestic labour reform, which supposedly will cheapen dismissals and strip employees of basic rights, was before the European monetary union took place and financials became entangled throughout the developed world.

The sentiment in Spain, both in the streets and in Parliament, was most probably today the same, one of frustration, and it will not go away easily.

The truth is that a casual comment of some senior level officer at the European Central Bank saying that printing euros was not-so-remote an option, in the way the Bank of England and the US Federal Reserve print sterling pounds and dollars, would be priced by the credit markets infinitely higher than if the industry and the public services had remained unaltered in Spain on Thursday.

Yet, the Spanish society has learnt in its recent past to overcome pettiness, and much, much worse sort of pettiness than the usual, universal right-left confrontation over what form or even how much capitalism should we live in. There isn’t all the time of the world ahead, but a creature in the making like Europe does not always move wisely, in perfect coordination or efficiently. Spaniards are as European as it gets.

Be the first to comment on "Spain’s general strike: a first for president Rajoy, a second defeat for the unions"