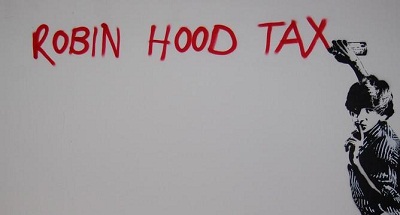 LONDON | For all the sovereign chin-ups the British prime minister David Cameron draws in every occasion he finds himself summoned to Brussels and Sarkozy’s financial transaction tax is mentioned, the savings gained in the name of the City of London would amount to just €8 billion.

Mr Cameron and his euro sceptic troops, barricaded behind a loud sector of the British society too prone to vent their frustration over the usual continental enemies, trust they can opt out and put the brakes on this new FTT levy. Then, unable to extend it to the whole of the European Union, the euro zone (EMU) member countries would be met with stringent legal stones on their shoes if they resolved to go ahead and shutter the free market area to non-euro European counterparts.

French president Nicolas Sarkozy, though, seems unwilling to let the chance of imposing the Robin Hood tax fade away. He recently brought the subject up during his first official conversation with Spain’s president Mariano Rajoy, asked him about it and got a positive answer. The summer of 2012 now looms as the probable moment in which the Robin Hood tax will come alive, even if only in France.

After Ernst & Young has used the data provided by the European Commission to consider the impact on the UK in both scenarios, that is, whether the introduction of the levy happens across the EU including the UK or confined within the EMU, the difference is almost irrelevant.

“Taking the EC’s estimates at face-value, if the FTT is introduced across the EU, the UK financial sector would generate around 75% of the total revenues.

“However, even if the UK were to opt out of the FTT, if a reverse charge mechanism was applied, we expect the UK financial sector would still contribute around 60% of total revenues. Moreover, these revenues would flow directly to governments in the euro zone rather than to the UK Exchequer.”

Mr Cameron’s ‘thanks-but-no-thanks’ could not stop all euro-denominated trades be charged, as the EU’s Robin Hood taxman wouldn’t care where they take place. The same recourse makes all trade of UK shares pay a stamp duty to the British Treasury, for instance. UK’s optout would slightly trim the bill from €28 billion to €21 billion.

‘[The Ernst & Young] report wrecks the government’s claim that blocking a Robin Hood Tax, despite the idea’s popularity with voters, is in Britain’s interests.

‘Signing the UK up would boost the Robin Hood Tax and raise around £35bn a year [from the entire EU] to combat poverty, invest in green jobs and help pay off the deficit.”

But would the European Robin Hood spend that capital so wisely? The City and Mr Cameron feel entitled to dismiss this exercise as one more mess coming from the euro Fawlty Towers, as it were. They have every right: not only the City would donate most of the payments, it would suffer a 2,100-job loss in the euro-denominated business (indirectly, there could be 3,400 jobs cut, which are numbers Ernst & Young also register in its study).

The FTT is plausible. Yet, it will only be successful when it has a reasonable and fair plan at its feet to convince the European financial industry and its hub, the UK, that it is worth the effort. The argument that it must be applied globally is disingenuous: let other emerging financial centres turn rogue and greedier, their inevitable failure will be our reward.