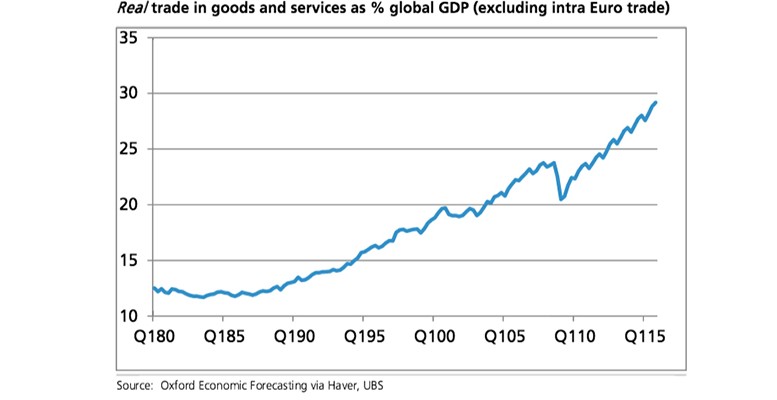 Global capital flow collapsed as a share of global GDP in the wake of the global financial crisis, and it is not recovering. This means that the role of the current account is rising relative to the capital account. It also means that the risk of a war for capital is rising – capital to finance balance of payments positions is less available than in the past.

The reversal of capital account globalisation seems likely to persist, at least as far as portfolio flows. There are three changes that have contributed to this situation, none of which seems likely to reverse.

The first issue is the role of regulation in the international financial system. Risk management through diversification is giving way to risk management through regulation, and with that there is either a formal or an informal home country bias. Banks are encouraged to lend, but generally to lend in their home market. Institutional investors face rules that encourage reduced currency risk.

The third issue is the fact that central banks foreign exchange intervention has the potential to magnify trends in capital flows. The main motive for currency intervention in recent years has been capital inflows and not the current account position. Portfolio and foreign direct investment flows in 2014 were roughly three times the size of the current account balance for this bloc.

The collapse of globalisation may not be over

Because a fixed exchange rate regime will see central bank intervention to balance the balance of payments, this inevitably meant that reserve accumulation (the purchase of foreign assets, generally portfolio assets) would be required to offset the capital inflows. Although consistent data is not yet available, we know from the behaviour of central banks and sovereign wealth funds that capital flows into fixed exchange rate regimes has faded over the course of the last twelve months. That creates a double force for reduced international capital flows. First the capital flow into direct investment or portfolios has reduced. Second the offsetting intervention capital flow into overseas portfolio assets has been reduced in roughly equal amount.

The reduced capital inflow into fixed exchange rate regimes could therefore mean that the collapse in capital globalisation since the crisis is not over – and that there is another leg down in the level of global capital flows.