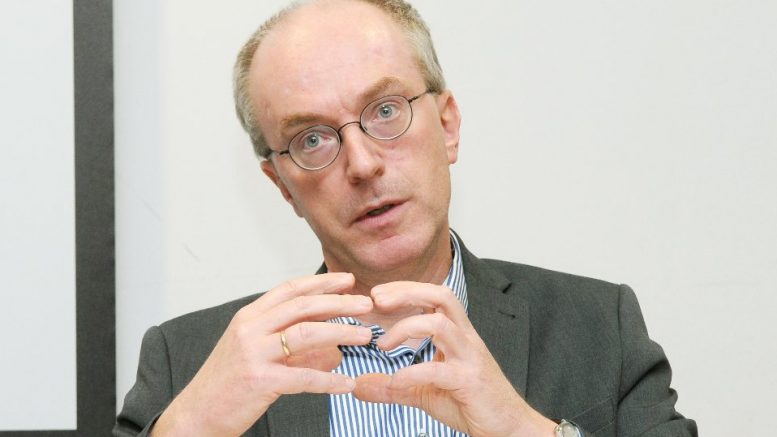 Prof. Friedrich Heinemann is head of the department "Corporate Taxation and Public Finance" at the Centre for European Economic Research (ZEW)

Lidia Conde (Frankfurt) | Friedrich Heinemann, at 52, is head of Public Finances investigation at the European Centre for Economic Investigation in Manheim (ZEW), one of the most prestigious in Europe. He is also professor of Economy at the University of Heidelberg, head of the European Integration Circle of Berlin and member of the management team of the European Policy Institute.

Q: Lately you have written a lot in the German press arising from the situation in Catalonia. What conclusions do you draw about the fiscal extent of the Catalan conflict?

A: The fact that citizens of one region distance themselves from their State responds to a whole range of cultural, political and social reasons. But the tax issue is very important. It’s what we always see when secessionist movements appear, from Scotland to Catalonia. The battle going on in the Italian regions of Veneto and Lombardy is pragmatic and financial. High tax charges which are prolonged over time unilaterally in a region are a risk for the federation or the existing unit.

A: The key is that many citizens perceive this unilateral overload as breaking a contract, which is understood as an agreement of mutual solidarity, not as a one-way transfer.

Q: In other words, that too much centralism in financial issues fuels divisions. And what about the ambitious reforms in Europe? What would the limit be there?

A: Centralism is neither good nor bad. In Europe, it makes sense to delegate certain political spheres at a European level, although that implies increasing the budget; this is the case of defence and immigration. But European centralism fuels suspicion when Brussels and the poorer States join forces against the wealthier countries to demand more resources. And this is what has happened in Spain, according to many Catalans. They believe that Madrid has teamed up with the poorer regions to benefit tax-wise from Catalonia’s resources. And to answer your question about the limit, the bar in Europe is definitely lower than the one in Spain with respect to Catalonia. Whatsmore, article 50 of the EU Treaty guarantees the possibility that any member country can leave the union. No court or government can say that the secession of a country from the union is illegal.

Q: In your view, has the failure of decentralisation boosted the independent movement? Have you observed similar centrifugal forces in Europe? Would that explain in part the shift towards the right (the success of xenophobic parties in Germany and Austria))

A: No, the migration crisis has been more decisive. You need to bear in mind that the EU Budget, which is 1% of EU GDP, is relatively small. Of course the richer countries pay more, but we’re talking about amounts that they can handle. And in any case, the benefits of participating in the EU for countries like Germany are much greater than the costs. But that doesn’t mean we shouldn’t be on the alert  and avoid decisions being made in a hurry, like new budgets without any justification, which reinforces this trend to towards the centralisation of spending. This would lead to more suspicions and a greater distancing with respect to the EU.

Q: The transfers from the south of Germany to the north and from the west to the east (towards the former RDA) have not fuelled secessionist movements because they have the agreement of the population. But how could Europe survive without a systems of transfers?

A: Europe has got on very well for decades without a transfers system. What is decisive for the economic boom is a dynamic internal market. It’s the poor countries which actually benefit a lot from the economic exchange. We can see this in the Eastern European states which are members of the EU: after the collapse of communism, there has been a huge rise in the welfare state in these countries, particularly because of their integration within the internal European market.

Q: You insist that the European centralisation of debts – eurobonds and mutualisation – is a risk factor.

A: There are two risks in the centralisation of sovereign debts: they will change the politicians and their voters’ stimuli. Why are the governments of countries like Spain, Italy or Ireland going to impose unpopular measures like reforms and spending caps, which fuel social discontent, when the financing of increasingly bigger deficits are not a problem. Whatsmore, that mutualisation would boost parties and movements with populist and fiscal programmes which lack any real foundation. And there is another risk: with eurobonds, Europe would lose the support of fiscally healthy countries. Ask them in Holland, Finland or Germany whether they are prepared to back Italy or Greece’s economic policy. Financial solidarity is only viable when it has the support of a large majority.

Q: What do you think about Macron’s proposal for a European finance minister with his own budget and democratic legitimacy?

A: It’s an interesting idea, but one which has not yet been firmed up. When you talk about the democratic legitimacy of a eurozone budget it’s not clear what that means. So is it that the European Parliament has to decide by majority on the budget or will it be the countries which contribute most to the financing that decide? Would it be democratic that in Holland or Finland they had to transfer money because a majority in the rest of Europe decides this? I have my doubts. The possibility would need to exist that those countries which contribute the most can veto any new spending proposals. This would make it democratically legitimate.