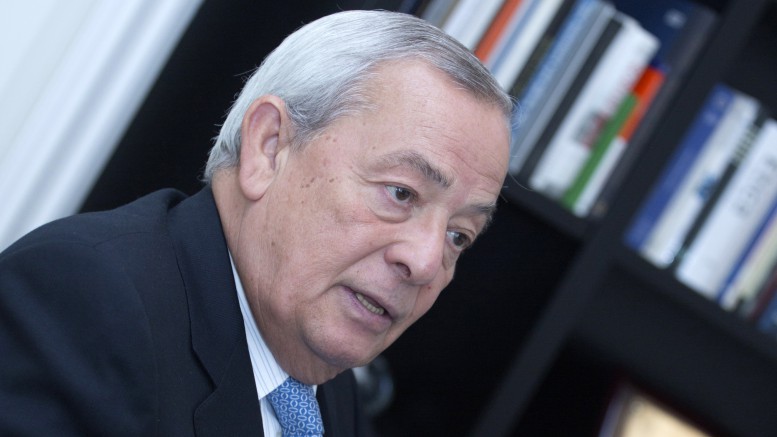 Q. Why is Spain growing faster than the rest of the eurozone? Is it because of the adjustments made by the government?

A. Spain’s economy is growing partly because it shrank more than the rest of the eurozone during the crisis. So once the recovery starts, it is logical that it’s faster, especially in the early stages. I do agree, however, that this growth can at least be partly attributed to the government. But I would make this exception: that the Popular Party (PP) government was largely forced to implement that adjustment, it wasn’t its priority. In fact, the PP was convinced that it only had to take office and the markets would acknowledge the change and the economy would improve.

Q. And that was not the case.

A. Of course not. When Rajoy drew up the first budget in 2012, they had to explain to him that it was not appropriate. VAT and income tax had to be modified and he also had to be more demanding in terms of fiscal adjustment. And, very importantly, his government also made a mistake in their initial handling of the banking crisis, especially in the case of Bankia. The outcome of all this was to send a message that the Spanish banks were in a worse situation than they actually were. This increased the costs of the banking sector restructuring.

A. Yes it did, after making some corrections. It began to adjust economic and fiscal policies and that process, together with other structural reforms, namely the labour market reform, paved the way for a recovery in economic confidence and activity. Our conclusion must be that the economic policy has generally been well oriented. Of course Spain has also benefited, like others, from decisive factors such as the drop in interest rates and the fall in oil prices.

Q. Do you think that the reforms have been enough or we need more?

A. The labour reform has been very important, especially on issues such as the breakdown of the former collective bargaining system, the change in the management of layoffs, wage fixing and in the relative power of the unions and the employers’ association. They have been very important changes.

A. They have been more decisive than many people think. So much so that we will have to study this new phenomenon of Spain’s history in detail ie about employment growing faster than GDP, which didn’t happen before. We will have to see if this is due only to the changes implemented as a result of the labour reform or to other factors.

Q. Do you agree then with the labour reforms made by the government?

A. In general, yes I do. The decentralisation of the collective bargaining system is positive. It has gained flexibility. Each factory and workplace adapts its wage bargaining and working conditions to its requirements. Before, general guidelines for the sector or province were implemented, causing rigidity and creating enormous difficulties for companies. It is also positive that layoffs can’t be prevented by the veto which was previously dictated from the union side. These and other measures have created a more flexible environment.

Q. These changes have been carried out by a right-wing party. Could a socialist government have made this reform?

A. The main labour reforms were made in the years ‘93 and ‘94. They started when I was a minister and continued after I left. At that time, because of the crisis which pushed the unemployment rate to around 25%, the Socialist Party (PSOE) already implemented reforms affecting some of the old labour ordinances, which imposed extreme rigidity in the recruitment system. It also modified the system governing unemployment benefits which had reached unsustainable levels, almost 4% of GDP.

A. Yes. Since then, any further reform of the labour market was undertaken because although we tried to implement them by consensus, no progress was made due to the unions’ boycott. We have needed a government with less of a connection to the trade unions, such as the right-wing Party, to be able to take some decisions which would have been very difficult for the PSOE. What I aspire to now is that these steps will not be undone, except for those things which have proven they don’t work and have caused imbalances.

Q. It seems that the general secretary of the PSOE wants to undo these reforms.

A. Sometimes the PSOE speaks about reconsidering these measures critically and designing a new Workers’ Statute. I think there will be some revisions, but the important changes which have generated more flexibility in the labour market and in employability will not disappear.

Q. What is your assessment of the regional and local elections’ results? Is it true that they can stop investment into Spain?

A. Well I think that is a matter which is too early to confirm. The elections are recent  and we need more time to find out. Everyone knows that investors tend to think that political and legal security is greater when governments have a majority than when they are in coalition, or they can’t even foresee what the final coalition government will be.

Q. That is what is happening in Spain, isn’t it?

A. The last elections have shown that the imperfect two-party system will not continue, but there are two other things which have been confirmed. Parties like Podemos and Ciudadanos, if the trend of the local and regional elections continues, will remain at a substantial distance from first and second place. And the ‘sorpasso’ of the PSOE by Podemos has not happened and is far from happening. But it is true that we will likely see some coalitions which maybe imply agreements that people may not like.

Q. But do you think that this will affect investment?

A. Of course that could have an effect, it usually does, but not permanently. Everything depends on how the new government starts off, especially if you start implementing unreasonable measures. But I do not share that fear at all; I do not think that’s going to happen.

Q. Aren’t you concerned by the fact that two cities, Madrid and Barcelona, both drivers of the economy, are already in the hands of two radical parties?

A. It is true that if we add to Madrid and Barcelona other cities like Valencia or Zaragoza, we find that almost half of the economy depends partly on these municipal governments. And of course that implies a risk because they may want, due to different motivations, to totally put a halt to the construction of some public building or city planning operations. That could affect the development of these cities and the economy in general.

Q. Some say that this perception of risk is not new, that we have experienced it at the beginning of the transition.

A. No, it is not the first time. It happened in some of the largest cities in Spain in the first regional and local elections, when the pro-Franco mayors were replaced by the socialist and communist left. In Madrid we lived that situation with Tierno Galván, who led a coalition of PSOE and the Communist Party. During that time, many projects were paralysed and many objections were raised about the city’s urban development, which caused a period of slower growth. Well these things happen and may also happen now. But substantial improvements in the social infrastructure of the poorest districts of the cities were achieved.

Q. They are talking about stopping the evictions. Can they do it?

A. No. I think the impact will be minimal because some measures are already being implemented in some places to avoid the most dramatic evictions through agreements between government and banks. I realise that avoiding all evictions would be desirable from a humane point of view,  but we can’t make the mistake of allowing people to simply stop paying: it could be dangerous. Moreover, local governments lack the capacity to amend laws. Even if they apply pressure they will not get any sensible government to change the laws regarding rents or mortgage loans. Furthermore, the improvement in the economy will significantly reduce defaults on rents or mortgages.

Q. Do you think Podemos’ proposals can be compatible with being in the EU?

A. I confess I have not read all of their proposals. But I have also seen that those which are the most unorthodox and incompatible with EU rules have disappeared little by little, which indicates they are moving more towards the centre. They aspire to playing an important role and if they insist on extravagant proposals, they would not get it. In the end, Spain, like other European countries, is a centrist country.

Q. In any event, we cannot extrapolate the regional election results to the general election. Voters wanted to punish the PP, don’t you think?

A. That is true. In general the PP may register a certain reflux of votes. When voters realise what they’re gambling and think about it, it is likely there will be some return of votes to the PP and the PSOE.

Be the first to comment on "“This is new in Spain’s history: employment growing faster than GDP”"