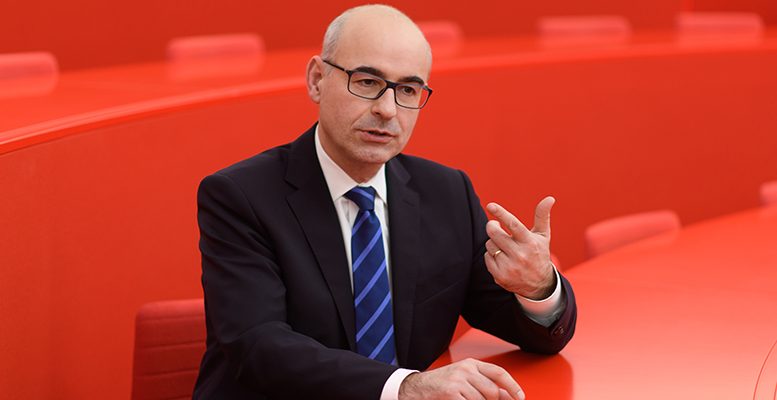 Lidia Conde (Fráncfort) | Achim Wambach has been the president of the European economic think tank ZEW in Mannheim since 2016. He is also president of the antimonopoly commission and the Association for Social Policy. He forms part of National Platform on Electromobility and works in the advisory council of the State of Baden-Württemberg for sustainable economic development. He is also a member of the scientific advisory council of the Ministry of Economy and Energy, which he presided between 2012 and 2015.

Germany is doing well now, but badly looking to the future. How is it doing really?

Well, if we take into account the economic indicators and the evolution of the economy in recent years. Its GDP has not stopped growing since the financial crisis in 2009 and will continue growing next year. It is the longest economic growth in Germany since 1966. Unemployment at 4.8% in November is the lowest since unification. Employment, with 45.2 million workers, is also a record. This means a fabulous income from taxes. Which has allowed the approval of a 2019 federal budget of more than 356 billion euros, 13 billion more than in 2018. For the sixth year in a row the state has not had to increase its indebtedness.

In a moment of significant uncertainties for the economy, what are the main challenges we are facing in the short term?

The challenges for Germany are enormous. Firstly, there is digitalisation, the digital economy. A key process for the economy given that German still has much to do. We are behind the curve in many areas, like the extension of broadband internet, the digitalisation of the health sector, or E-Government. And of course companies must urgently think about how to take on the digital possibilities in their business models to strengthen themselves and avoid being displaced by foreign digital actors. Another challenge is climate change, moving from carbon fuels to renewable energies. In recent years Germany has not made as much progress as expected. It may not even meet the climate targets it imposed on itself for 2020. Another key problem is demographic change. A key question for which we have still not found all the possible answers.

How can we maintain the future of the German and European social state, taking into account that the economy finds itself facing one of the largest transformations since the industrial revolution?

The German social state and its institutions are already being continuously reformed to adapt them to social changes. This has been going on in recent years. A clear example is the measure introduced in 2012 to put back the retirement age from 65 to 67 until 2029. Now the government has asked the pensions commission to develop measures to sustain the pensions system in the long term, taking into account the changing relationship between the number of people paying social security and the number receiving pensions. We will also have to convince the population ever more that private pensions can complement state pensions.

Will the social market economy (interpreted in Germany as social advance through free competition) be able to function in the digital era?

Yes, but firstly I must warn you that in the concept of the social market economy competition is not completely free, but subject to rules. Therefore competition policy has a central role in ensuring that competition functions fairly. We have to find ways to consolidate and strengthen the instruments for controlling market abuse. German competition and antimonopoly law determine what is fair. It sanctions the abuse of market power and analyses the impact of mergers on competition. The European Commission seeks the same, and in July imposed a record fine on Google for illegal practices in relation to Android mobile devices to reinforce their dominant position in Google´s internet search services. Since 2011 Google had been imposing illegal restrictions on Android device manufacturers to consolidate their dominant position.

So will the social market economy continue in the future?

I think the social market economy can also function in the digital era, but it will have to be updated. Competition policy will have to adapt and expand its instruments. Above all taking account of the increase in monopolising tendencies which emerge with digitalisation and the new market forms, like the online reservation platform market.

The world thinks Germany is rich. But it is also poor. How much poverty is there really and is it true that inequality is growing?

If we compare Germany to the rest of the world, we can consider it a wealthy country. In 2017 Germany was among the 20 countries with highest income per capita, behind countries like Luxembourg and Switzerland, and ahead of other major European countries like France and Italy. On the other hand, there is also poverty. Those who receive less than 60% of the average income of the society are considered at risk of poverty. According to this definition, there are 13.1 million people at risk of poverty; 16.1%, a fairly high percentage. But it is not increasing. While income inequality grew between the end of the nineties and 2005, it has remained constant since then. That said, policy must not lose sight of the data on the evolution of the share of incomes. On the other hand, you have to remember that in Germany we are talking of relative poverty. Our social system guarantees that there is no absolute poverty, there is no-one with nothing to eat or nowhere to live … This dies not exist, or hardly.