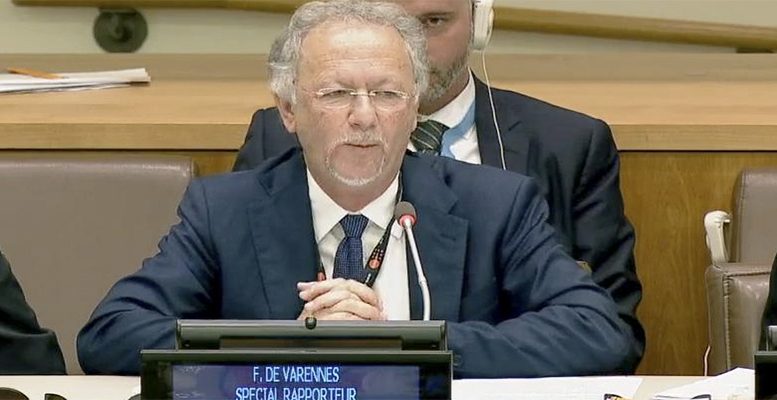 Ana Fuentes | During 12 days in January, a special rapporteur from the UN visited Spain to “collect first hand information on the situation of minorities in the country, identify good practice and key areas which need improvement”. At the end of his mission, Fernand de Varennes, a Canadian professor, explained in a press conference that he proposed to evaluate the access to education, including that given in minority languages (Basque, Catalan and Galician), religious freedom, the inclusion of Roma and the disabled and gender equality. In any case, he insisted that his conclusions will not be ready until December. In other words, that he will work at distance using the data he has collected in less than two weeks in the country.

UN rapporteurs, honorary posts which receive no salary, ask to visit a country, whose government can accept or not. The UN has confirmed that the visit in this case was agreed by the Rajoy government in May 2018.

That a country accepts to submit itself to international scrutiny is a sign of democratic normality. In China, Sudan or Venezuela, rapporteurs are not accepted. Fernand de Varennes has dedicated his career to the study of minorities and human rights, issues on which he has written various books. His previous missions have taken him to places as different as Slovenia (2017) and Botswana (2018). Why he chose the fourth economy in the Eurozone is a mystery. As is the fact that he has not asked to visit other countries in the vicinity with similar challenges, like Italy (minority languages, integration of Roma and Muslims).

Like all social scientists, UN rapporteurs work on the basis of a closed methodology. In this case, the definition of minorities in the UN only makes reference to that group of the population making up less than half of the territory’s citizens. In other words, that those in Catalonia who want their children educated in Spanish don’t receive the same protection as those who defend the use of Catalan as the only language. De Varennes insists that analyzing this asymmetry is not his task.

What is relevant to him, it seems, is to establish conclusions about the treatment of the Catalan politicians in prison. Before the press, the rapporteur made clear that he rejects the accusation of rebellion. A vision which, on the other hand, is shared by many lawmakers in Spain.

Fernand de Varennes’ mission has had little international impact, which reflects the reduced importance of the UN itself. But it has served to soften the more extreme positions, which have sought to present it as a reflection of a reduction in the freedom of expression and ideology. If in the end the Catalan separatist politicians are found guilty of rebellion, the rebel is a subject of international law which the UN recognises. The UN will therefore be obliged to put the focus on Spain.