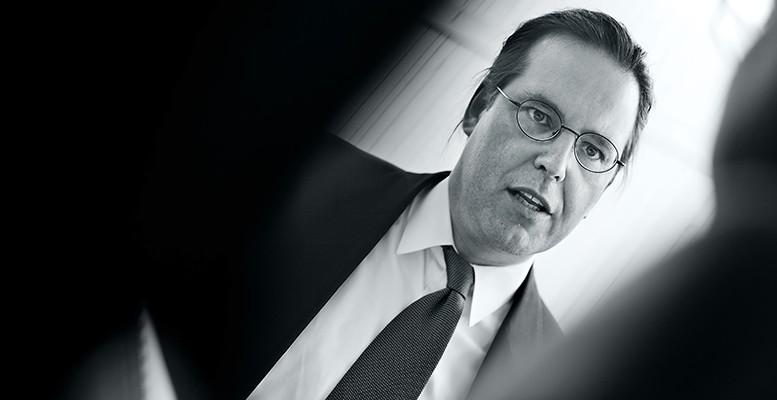 The devaluation of the yuan in early August has gotten the attention of investors and economists, but Aders Borg, Sweden’s former finance minister and the current chairman of the World Economic Forum’s Global Financial System Initiative, says this type of thing is to be expected amid structural economic reform.

In a recent interview with Caixin, Borg said that many successful examples of structural reform, especially in Europe, came amid currency depreciation. During Borg’s tenure as Swedish finance minister, Sweden’s krona saw a devaluation of nearly 30 percent against U.S. dollar between 2009 and 2010, as the country’s economy recovered from the global financial crisis.

“We have seen yuan appreciation for a substantial period, and I assume that if you want to do another round of structural reform, it would probably occur on the back of depreciation of the currency,” he said.

Borg, who was born in Stockholm in 1968, is a renowned economist in Sweden. He served as the finance minister from 2006 to 2014, and was seen as the author of the Swedish government’s economic doctrine, which focused on proactive measures against unemployment.

In November, Borg was appointed by the World Economic Forum to lead the new Global Financial System Initiative, which aims to facilitate cooperation toward a new framework for the future global financial system.

In his interview with Caixin, Borg discussed his views of China’s reform progress and monetary policy; his expectations on the U.S. Federal Reserves’ possible rate hike; and the implications of disruptive innovation on financial stability. Excerpts from his interview follow.

Caixin: What’s your take on the progress of reform in China?

Anders Borg: What the new Chinese leaders did in the third plenum was to lay out a reform plan, and the ambition is very high in terms of opening the economy, improving the efficiency of state enterprises and having the market allocate resources. The Chinese government has very ambitious long-term plans. In my mind, implementation is crucial. What we see in Chinese history is that every time a slowdown occurs in the economy, the government implements a new round of reforms. I think this is also an important lesson for this administration, to continue doing the same thing as previous reformers. If you see the same short-term problems, I think the best way out is to carry out more long-term reforms.

The central bank had been reluctant to loosen its monetary policy until recently. What’s your opinion of this?

When you see a slowdown, you normally want to see some support for demand or depreciation of the currency or lowering of interest rates. To reinforce growth, you should also perform structural reform. So these two factors go hand in hand. It’s obviously a restriction for China that there has been lots of talk about the stimulus program that was implemented in the past few years and worries about debt problems. I think we should be clear that China is a low-debt country that has a very high savings rate. You have some problems with debt repayment by local governments, and it very important that the central government is dealing with those issues. The fact I see is the Chinese government has dealt with the financial crisis efficiently. I think it indicates that China is able to deal with these problems.

How do you view the recent depreciation of the yuan?

If you look at different examples of countries that gone through structural reforms, most often these cases are done on the back of currency depreciation. China is now in a situation in which we have seen currency appreciation for a substantial period, and I assume that if you want to do another round of structural reform, it would probably need to be done on the back of depreciation of the currency. On the overall perspective, I would argue that if we want to see stronger growth in China, you probably need to see more expansionary policies, and that would probably involve a weaker currency.

Obviously we don’t want to see excessive instability in the currency market, but there are also responsibilities for other countries. The Federal Reserve is now talking about moves with their monetary policy. It is very important for them to take into account the global financial system. We are noting increasing tension as the U.S. authorities are narrowly focusing on their domestic issues.

What is your opinion on the expected rate rise by the Fed?

I think the Fed should postpone the rate increase. We have healthier commodity prices and the price of oil price is recovering. And there is also a slowdown in the global economy. So the Fed has time to adjust the monetary policy at a slower pace.

How do you see the progress of financial and banking regulations in Western countries after the financial crisis?

I think we’ve made substantial progress, particularly when it comes to capital structures as banks face tighter capital requirements. We also made some progress in terms of supervision of our large institutions, which are now supervised by the European Central Bank, the common supervisory body for the whole euro area. And we are also seeing a much stronger supervisory process in the U.S. and UK.

You have been chair of the World Economic Forum’s Global Financial System Initiative since November. Can you tell us about the new initiative and your responsibility?

We established the initiative actually at the Davos meeting last year, so we are still in the early phase. We are working on three main issues. One is the overall discussion on the framework and architecture for the global financial system. We are seeing tremendous changes in terms of payment transfers and asset management, which indicate growth and financial stability, and we are monitoring monetary policy in general. So we are trying to bring together the relevant central banks, the main people regulating the global economy, bring together normally central bank technology specialists, so that all the partners understand each other. We are also working on financial inclusion. In many countries, we have direct cooperation, such as in Indonesia and India, where we bring all the stakeholders, including the regulatory body, the banks and the telecom companies together to improve access to the global financial system for people in rural areas and people have previously been left behind. We are working together with governments to facilitate the process in India and Indonesia, and we probably will broaden cooperation into Latin America.

You mentioned that disruptive innovation reduces stability. What are the specific areas that you think will potentially hurt stability?

We have working groups with the world’s largest financial institutions and tech companies assessing the situation we are in. And one of the main conclusions is that basically all parts of the financial and banking system are already exposed to technological disruption, including money transfers, cash payments, mortgages, consumer lending and asset management.

There is nothing really in the overall financial sector that is unaffected by technological change. In China, you have Alibaba and in the U.S., there is Apple, Google and other major players that are looking at the financial sector. There is an enormous amount of smaller companies.

I think we need to first understand how transformational this change is and then we need to assess its implications for financial stability. We are initiating a process involving major central banks, bringing them together with tech companies to understand the risk here. We are now creating a lot of regulatory structures for banking and the insurance system. We probably need to watch shadow banking, where there is the risk that unregulated sectors will contribute to asset price bubbles.