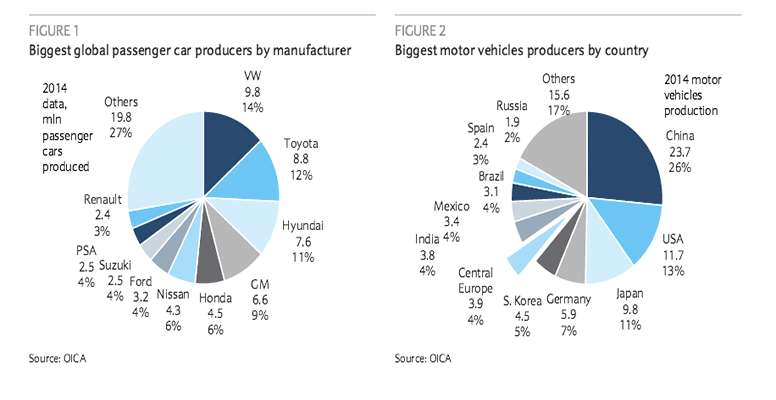 Barclays | Potential reduction in car production as a result of the Volkswagen emissions scandal may negatively affect growth in Central Europe – we believe VW factories generate 0.5- 2.9% of GDP in Czech Republic, Slovakia, Hungary and Poland. However, over the medium term the region should continue to benefit from Western European companies outsourcing production. Banks have limited direct exposure (1-4% of total loans), although may suffer from second-round effects.

Considering the geographical mix, we consider Erste, Komercni and OTP to be most vulnerable on a top-down view, yet remain positive OTP on the back of an ROE recovery story and valuation.

CE automotive industry is efficient, competitive, and big: Since EU entry in 2004 car production in the region has more than doubled, and now every sixth new car in the EU comes out of factories in new member co untries. For Czech Republic, Slovakia and Hungary, the automotive sect or is especially important – it generates a substantial trading surplus (6-11% of GDP) and empl oys 6-7% of the workforce. Poland has comparatively less exposure given its more diversified economy. Lower labor costs, existing and still developing infrastructure and well-established supplier chains should lead to continued accelerated growth in vehicle production in the medium term.

Volkswagen is the key producer in Czech Republic, Slovakia, Hungary and Poland with a 42% share in 2014. Our analysis shows a reduction in output (20% in the worst case) may result in a visible economic impa ct, possibly not limited to the automotive industry. However, the 2009 experience showed EU companies are more likely to shift expensive production facilities to low-cost CEE countries, so even a dip in VW output in 2016 would likely be overcome relatively quickly.

As large car producers typically provide funding to their CE plants from HQ, ba nks’ direct exposure is not large – typically 1-4% of loans. However, a manufacturing slowdown may undermine currently strong GDP growth, hampering loan demand and leading to quicker normalisation of cost of risk. In our forecasts for the more exposed players we do not assume provision releases despite healthy macro to date, and see no changes to our forecasts.

Despite significant exposure to automotive on a macro level, Hungarian banks have little ex posure to manufacturers as most of the corporate debt in the country comes from in tra-group funding (55% of GDP). We still expect an ROTE recovery to 13-15% in 2016-17 on the back of better results in Hungary, resumption of cred it growth and phasing out of Russia/Ukraine losses. We see 20% upside potential, with the stock trading at 8.6x P/E 2016E and 1.15x P/TBV.