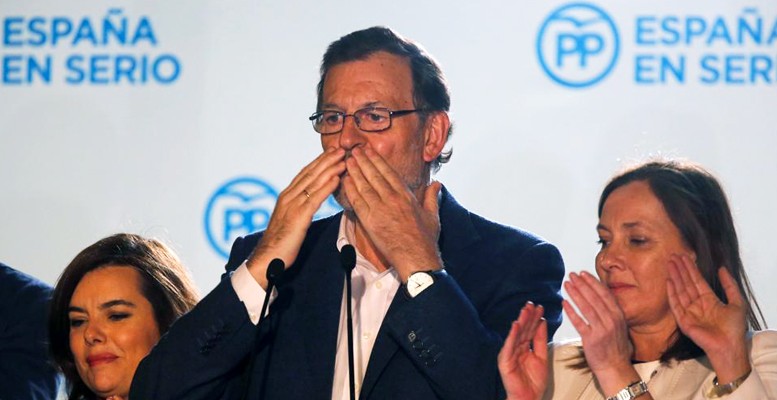 Many people feared that the outcome of the December 20 elections in Spain would be difficult to manage. But the final situation is much worse than expected. As soon as the recount began after the voting, the conservatives of Prime Minister Mariano Rajoy’s Popular Party (PP) lost their hopes of forming a majority government with Citizens (Ciudadanos).

In spite of wining the most votes and seats (123), the PP fell short of a parliamentary majority (176 seats). And neither does it have the possibility of forming a government with Ciudadanos, the business-friendly party formed in Catalonia in 2006 by 36-year old Albert Rivera. Ciudadanos had been expected to get 46-50 seats, but their final total was 40, which is not enough. Even combining their seats, they would have just 163. And at first sight there is no other likely ally, with available votes, to contribute more votes and seats.

So if the PP now tries to form a government, it is highly likely the party would be defeated in parliament. This could open the door to the possibility of a socialist executive, in coalition or backed by Podemos, a far left and anti-system party formed in 2014 by 37-year old Pablo Iglesias.

But this option could also be unworkable, given that the sum of these two parties does not give them a majority either. Both combined total just 159 seats. They would of course have 13 more with the support of Esquerra, Unidad Popular (IU) and Bildu. But this would be unthinkable. Not even socialist voters would consider the backing of Esquerra or Bildu as acceptable to a socialist government. The first is an independentist party, working to take Catalonia away from Spain, while the second backed ETA and terrorism. Furthermore, such a coalition would be unfeasible.

The question is that while Iglesias’s party has toned down a lot in the last few months, it is still very far from conventional socialism. The other problem is that very few of the PSOE (socialist party)’s regional leaders are enthusiastic about any kind of legislative and government alliance between their party and a extreme left group like Podemos.

So faced with this situation, many think the most reasonable answer would be a coalition government between the PP and the PSOE. It would bring stability and business acceptance. But this scenario is complicated because neither Pedro Sanchez, PSOE leader and a 43-year-old former university economics professor, nor his voters, seem prepared to accept an alliance with a party they scornfully refer to as ‘la Derecha’ (the right).

In the end, Spain has ended up in a worse situation than Portugal. At least in the neighbouring country there was a majority of left-wing parties in parliament, which made forming a new government possible within a few weeks. Besides the fact that the Portuguese left parties backing the PSP (Partido Socialista Portugues) are far more moderate than Podemos.

So Spain is now, undeniably, facing a period of difficult coalition-building after yesterday’s elections. And this is a very worrisome situation for the country as uncertainty is likely to increase, affecting the mood of investors and companies. This in turn could lead to a slowdown in GDP, which grew 3.4% year-on-year in the third quarter, well above the eurozone average.

If Rajoy is finally not able to get the backing to form a government, he will be the third European leader to be ousted this year, along with that of Portugal and Greece, after pushing through austerity measures.