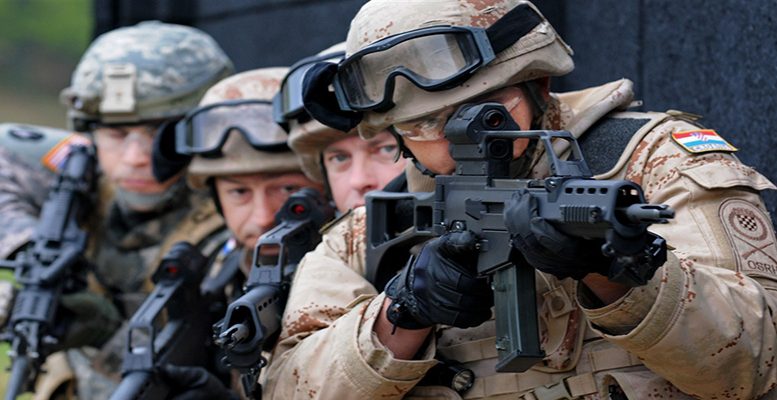 By Israel Rafalovich | Things have changed on the international political stage, and the European in particular, which gives the European Union an unprecedented opportunity to mould and shape its own military and foreign policy in a way that makes it possible for the EU to deal with crisis on the European continent and elsewhere without American interference. A key lesson is that the EU has to be the one to call the shots in matters of security, foreign policy as well as the economy.

Bearing in mind there are tendencies in the EU not to view the European Union and its Security System as a supplement to NATO but as its replacement. Let me underline for the thousand and one time. NATO is a relic of the past and no new “strategic concept” can revive the irrelevance of NATO. It should have been dissolved when the Warsaw Pact closed up shop. Today, more then ever before, the European Union must take responsibility for its security interests in a way that will result in defence integration and reinforce defence cooperation amongst EU member states.

Is should be the EU’s assertion of sovereignty that its security is better assured by a dominating European Union and it should seek to become e serious counterpart for the United States.

The unity among EU member states is a fundamental condition for the EU Security System to be successful. By directing the efforts of the participating countries towards the common purpose of a European Union defence the military force must coordinate more intensively and effectively with each other than is the case today. This means, developing structures and capabilities which are relevant to the current conditions and are of sufficient scale and capability in key enabling areas: Drones, Helicopters, air-to-air refueling, satellite communications.

Greater emphasis should be placed on capabilities that can help project military power in a more challenging operational environment, such as long-range strike, underwater warfare, stealthy airliner combat systems, special operation forces, cyber warfare, space defence and satellite weapons. All this in order to achieve the goals of a coherent European Union security policy which also connects economic interests with strong defence capabilities as a tool to shore up the EU’s substantial economic power.

The EU must encourage EU leadership in research and development of defence industries in order not to be dependent on hardware from the United States, South Korea or Israel. Mistrust of the United States runs deep in EU quarters and the European Union has to decide to what extent and what forum, if at all, the United States should remain politically and militarily engaged. One of the common responses to American foreign policy is that the United States never ratified the Comprehensive Test-Ban Treaty (CTBT).

Unanimity dominates amongst Europeans and their partners in Asia and Africa, over the fact that the United States because of its nuclear policy does not have the credentials to preach to others how they have to act.

EU member states should be working more forcefully for the creation of the new sovereign EU army under combined EU command and control, that will be a capable and powerful military force. They have to sit together, set priorities and assess the state of defence. In order to strengthen the defences of the Eastern part of the EU and contribute to deterrence there, the EU should pay great attention to ‘Air-Land’ capabilities like air combat, air defence, heavy armour artillery, cyber-defence and energy based weaponry. They should also put emphasis on situational awerness and surveillance capabilities.

Member states have to show their capability in policing and sharing efforts and keeping an eye out for possibilities of pooling military capabilities. They will also have to be ready to contribute to a EU military coalition in time of need according to their capabilities, and they will need to find ways to share resources or buy equipment together.

The Rapid Reaction Forces and the EU battle groups which have been in existence since 2007, but have never been used, should be the base of the new army which will enable the EU to shoulder international political and military responsibilities.

The well being of the EU security System and its members must have priority. It should be based on solidarity against all forms of external threats. This should be the basis of common security and mutual assistance in the event of crisis or war.

The political and economic instruments which only the EU can provide will be indispensable for obtaining long-term peace and stability. Therefore all EU intervention, under whichever framework, should coordinate as closely as possible with the EU. The most important requirement is the willingness of France to extend its assurance of nuclear protection to countries belonging to the EU Security System.

France’s nuclear forces were set up with the declared objective of guaranteeing France’s independent security and at the same time to overcome the political status quo in Europe. Both, the strategic and political expedience of French nuclear weapons always depended on the respective international constellation. The French security is based on the nuclear guarantee provided by a “flexible response”. The real significance of the French force is rooted in its function as a multiplier of the overall deterrence of the EU security. With this in mind, the question that arises today is how it could contribute to the stabilisation of EU deterrence.

France is determined to employ this policy in the interests of a common EU defence. The question is whether France will let itself be tied to the common nuclear risks, by offering the EU its nuclear umbrella. France has stressed that French conventional forces form an integrated system of deterrence together with the pre-strategic and strategic nuclear components.

According to the French view, practically demonstrated solidarity in the fields of conventional weapons and the continuing of nuclear uncertainties are not mutually exclusive. On the contrary, they are two sides of the same coin. It should be underlined that, without adequate integration into a common EU security System, French nuclear power cannot fulfill the function of strengthening a unified EU Security System.

For France, the close link to its conventional forces with it own pre-strategic and strategic potential, which includes the capability to threaten the first use of nuclear weapons, forms the basis for a European security capability. If the ability to project force is now a sign of an independent EU foreign and security policy, then the EU has at last to get bolder and more resolute in its action. It is also an opportunity for the EU as well as a challenge to be able to walk alone on the international stage without American crutches. The EU is needed on the international stage and should play a decisive role in calming conflicts, and should become a counter balance to the United States on the world stage.

The European Union must change the diplomatic dynamic on the international stage if it wants its leadership to be accepted and avoid its entire foreign policy losing credibility. There is only the hope that courage and political imagination will secure the EU’s future in this changing world.