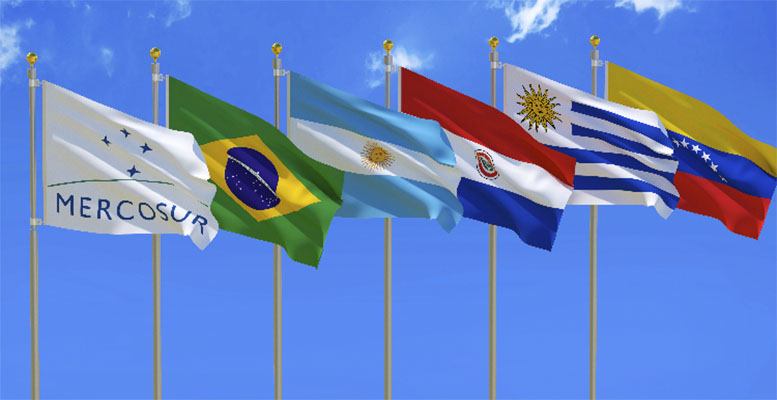 Thirty years after its foundation, the original objectives of Mercosur's integration process have only been partially achieved

Andreas Baur, Lisandra Flach and Feodora Teti (Ifo Institute )| Mercosur, one of Latin America’s most ambitious economic and political integration projects, celebrates its thirtieth anniversary on March 26, 2021. The fact that the member countries Argentina, Brazil, Paraguay and Uruguay have little reason to celebrate is not only due to the Corona pandemic. The disappointment about the slow progress with respect to integration is widespread among members, and the future of Mercosur seems more unclear than ever.

Thirty years after its foundation, the original objectives of Mercosur’s integration process have only been partially achieved. On the one hand, substantial and rapid trade liberalization within Mercosur in the first years after its foundation have initially lead to an intensification of intra-Mercosur trade and can be regarded as an early success. On the other hand, the ambitious goals set by members in the beginning have not yet been achieved: the transition from a trade agreement to a customs union has failed, and deeper integration steps such as the free movement of workers hardly seem feasible.

China emerges as Mercosur’s most important trade partner, whereas the EU loses relative importance in the region

While Mercosur’s exports to China accounted for only around 2% of its total exports in 2000, this ratio rose rapidly in the following 18 years to 22.1% in 2018. China is now by far the most important export market for Mercosur’s member states, overtaking the European Union, historically the region’s most important trading partner. On the import side, a similar picture is emerging. China’s share of Mercosur-imports has grown rapidly over the past 20 years and was only slightly behind the EU’s share in 2018. China’s rapid rise as the most important market over the past ten years has not led to an overall increase in Mercosur export volumes. Instead, there have been trade diversion away from Europe toward the Chinese market. Most of Mercosur’s exports to China consist of agricultural products (e.g. soy) and mineral substances. Although Mercosur exports to the EU are also dominated by this sector, exports to this region are much more diversified.

After 30 years, the importance of intra-Mercosur trade has returned to its initial level in the 1990’s. Moreover, compared with the Latin American countries of the Pacific Alliance (Chile, Peru, Colombia and Mexico), the two largest Mercosur members Argentina and Brazil have a lower level of integration into international production networks: Only close to 6% of Argentina’s and 8% of Brazil’s value added is generated via global value chains. This low number is in strong contrast to the average of 14% for the Pacific Alliance member countries or the world average. High trade costs due to MFN tariffs, non-tariff barriers, rules of origin, and hardly any deep trade agreements with third countries make it difficult for Mercosur members to integrate into global supply chains.

Even though tariffs were eliminated on almost 99% of tariff lines, the four member-countries could exclude sensitive products from tariff reduction. The implication is a complicated design consisting of a list of tariff exemptions inside Mercosur. Differences in external tariffs among Mercosur members lead to additional trade costs and hinder further integration. For instance, to prevent exporters from third countries from exploiting differences in external tariffs among members, firms exporting within Mercosur must comply with rules of origin to obtain preferential market access. Because rules of origin are costly for firms, they reduce integration into global value chains and the degree of diversification of suppliers. Moreover, they may lead to inefficient sourcing decisions.

In addition to tariffs, non-tariff barriers help to explain the low level of integration within the region. Countries use several protectionist measures that go beyond classic MFN tariffs. One example are numerous cases of antidumping duties imposed by Argentina on Brazilian textile exports since the 1990’s.

High MFN tariffs and non-tariff trade barriers as well as hardly any trade agreement with third countries hinder integration of Mercosur into global trade. Moreover, member states show currently little effort in taking additional steps towards deeper egional integration. In this context, making Mercosur more flexible (e.g. by allowing member states to negotiate bilateral trade agreements on their own) might be an option to prevent a deadlock in South American trade policy.

At this critical point in the Mercosur integration process, the EU-Mercosur trade agreement could play an important role. First, a successful ratification of the agreement might remind Mercosur member states again of the advantages of forming a large trade block and might encourage a renewed interest in tackling present integration deficits. Second, the agreement can contribute to a better integration into global and regional supply chains in South America and help reduce current dependencies from China as a trade partner.