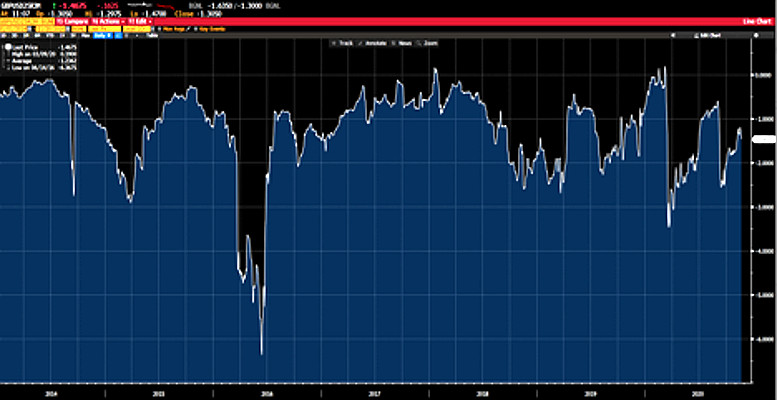 Mike Riddell, Portfolio Manager, Allianz Strategic Bond, (AllianzGI) ! 1. What would a significant removal of Brexit risks mean – especially, given the clarity on the U.S. election results and solid evidence that a COVID-19 vaccine is taking shape, boosting sentiment and the global growth outlook? Our view for some time has been that while some form of Brexit deal might be reached by the end of the year, this deal isn’t likely to substantively cover large parts of the UK economy, specifically those more complex sectors such as services.

Even at the point some form of deal is reached we may avoid the ‘cliff-edge’ scenario some fear, but there will remain ongoing uncertainty with the future relationships of sectors that haven’t been substantively covered. Over the longer-term we therefore have a bias to be bearish on sterling.

Just looking at the removal of this ‘cliff-edge’ Brexit though, in terms of what this removal would mean for markets like sterling – the starting point is “what do markets currently expect?” The chart above shows risk reversals on GBPUSD exchange rate – essentially the more negative the number, the more bearish the market is on sterling. Sterling certainly doesn’t seem to be pricing in a worst-case outcome, instead market expectations appear around their average ‘bearishness’ over the last 6 years, implying the market has priced into some extent that some form of deal will be reached. While the removal of cliff-edge risk would likely be positive for sterling over the short-term, upside would be limited to the extent that this has already been partially priced in. The market’s attention may then move to what the longer-term implications of the deal are for the UK economy.

2 Is it possible to quantify how damaging Brexit has been in terms of adding to global uncertainty in the last 4 years?

One (imperfect) way to assess uncertainty specifically is to look at the difference between the “UK” and “Global” Baker, Bloom & Davis Economic Policy Uncertainty indices. The global index is GDP-weighted, so when the line is in the positive this shows you that the UK has been a net positive contributor to global uncertainty, as it has been for most of the time since 2016. This year, the UK has on average been contributing less to global uncertainty than other countries. Despite the pandemic, UK policy uncertainty has actually fallen this year as we’ve got closer to the Brexit deadline, while that of the global economy has increased. I’d take this with a pinch of salt though, as the fall in UK uncertainty could be due to a quirk in the methodology of the index calculation, which relies on the frequency of “newspaper articles regarding policy uncertainty”, rather than the severity of said uncertainty.

What is harder to quantify however is the extent to which this global or UK ‘uncertainty’ itself specifically translates into GDP figures. For financial markets, the impact of heightened economic uncertainty can be offset by stimulus measures, as we’ve seen this year.

The -2.5% underperformance of UK real GDP growth relative to OECD countries over the last 4 years (to 31/12/2019) clearly signals the damaging impact Brexit has had on business confidence. Brexit uncertainty has led to slower investment, with firms instead building up cash buffers from ~16% up to ~19% of GDP. The opportunity cost of this saving is the slower rate of GDP growth experienced. The chart below is from Pantheon, demonstrating this impact after the Brexit vote (before the virus caused this cash buffer build up to really accelerate this year).

3. And, outside COVID, what are the next big risks for markets going into next year/ what will be the next focus?

Assuming global growth weathers the current wave and improves into next year, the next big challenge will be for central banks to begin the process of exiting their record amounts of stimulus without contributing to market volatility. Given the range of policies in place this is likely to be easier for some countries to do than others, but all policy makers will likely have the experiences of 2013’s taper tantrum in mind. We expect this to be a slow process, but there is a risk that March & April’s jump higher in inflation prints could spook markets into thinking a structural increase in inflation rates is occurring, which would necessitate a faster rate of policy tightening. This jump is entirely predictable and will begin to fade from June, simply due to the base effects of calculating a year on year figure when the oil priced moved negative in April last year, but markets have previously demonstrated an inability to comprehend this.

4. What do you think will be the key thing markets will be looking at from the ECB’s December meeting?

The ECB has already communicated additional stimulus, but it remains a question of what policy levers they’d pull and by how much. We’d expect an expansion of the existing QE programmes, and recent comments by ECB officials have opened the possibility that the policy rate could be cut, which definitely has not been priced in by the market. While a rate cut probably won’t happen at this meeting, if the Eurozone economy slumps as we expect in the next few months then this could well be an option for the following meeting.

5. Is the signing of a deal the moment when sufficient uncertainty about Britain’s trading relationship with its largest trading partner is lifted and UK assets can recover their Brexit discount that has kept UK assets so undervalued for the last 4-1/2 years? How are you positioned on the UK medium-term? Again, think the first part is covered but regarding how we’re positioned… In terms of positioning to our Brexit outlook, it really depends upon which market you are looking at. One key tenet of our approach to markets is that different markets often price different macro scenarios. Arguably gilts have been relatively richer than other government bonds in recent years due to the Brexit uncertainty. In terms of valuations however, we don’t believe the BoE will move rates into negative territory, and so much of the bad news already seemed to be priced in to the UK gilt market with upside limited. We still remain short duration at the portfolio level, and underweight UK duration with a preference for other markets such as Australian government bonds.

Gilts are to a large extent driven by global government bond markets, and so this is partially a reflection of our broader macro views. The UK inflation market is an additional area that is worth mentioning too. Sterling is the primary driver of UK inflation, and when sterling falls, UK inflation rates typically rise over the next 12-18 months. While our medium-term Brexit expectation is aligned with a fall in sterling (discussed above), we do not want to be long inflation at this juncture. The reason comes down to valuations, where the market is already pricing inflation to be ~0.55% above the Bank of England’s target over the next 5 years. This appears too high, even in light of a potential fall in sterling.

Where we have the flexibility in the Allianz Strategic Bond Fund, we are both short sterling and also short UK inflation. The former appears to be underappreciating Brexit risks, while the latter appears to be over-appreciating them. We like these types of macro relative value trades.

On sterling credit – we are underweight. Credit everywhere has moved from attractively valued in late March to now quite expensive against the macro backdrop. The UK is generally a less liquid market, a consistent phenomenon over the last 10 years, which accounts for much of the discount seen to US or EUR credit markets.