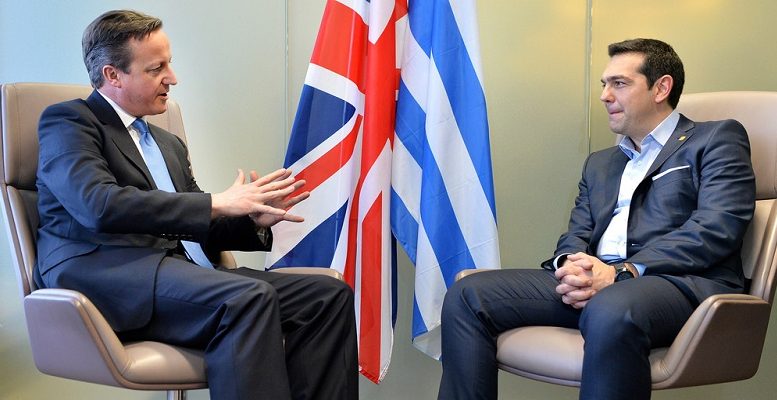 Nick Malkoutzis via Macropolis | A pointless referendum, a prime minister resigning, the opposition collapsing in a heap, the finance minister disappearing and nobody having any plan about what to do: This has all happened over the last few years in Greece. Never, though, all at the same time as has just occurred in the UK.

The disintegration of Britain’s political system over a few hours, following a victory for the Leave campaign, has been a real revelation for those observing from outside, particularly in Greece, which has been seen as somewhat of a basket case since 2010.

The list of events that happened in the wake of Brexit were simply stunning: Prime Minister David Cameron threw in the towel after losing a referendum he did not need to call but whose result he promised to implement, Chancellor George Osborne went into hiding and only resurfaced three days later; the Parliamentary Labour Party turned on its leader, Jeremy Corbyn, following his lacklustre campaigning for Remain; Boris Johnson, who injected vitality into the Leave campaign, went off to play cricket; and his other Leave colleagues admitted they had no plan for what to do next.

Even for close observers of Greece’s shambolic politics in the modern era, the turmoil of the last few days has been something to behold. One of the world’s most advanced economies, with no threat of bankruptcy and no need to adopt disruptive austerity packages, had suddenly propelled itself into a world of confusion, uncertainty and division virtually in the blink of an eye.

The bemusement with which Greeks observed this downfall, perhaps with a pinch of schadenfreude, was summed up by Prime Minister Alexis Tsipras’s reaction at the European Council this week. As the European Union leaders gathered for dinner, the Greek premier reportedly wondered aloud how it was possible for the British government not to be prepared for a Leave victory when only two outcomes were possible. Apparently this intervention prompted much mirth around the dinner table because it was coming from the leader of a country with a strong aversion to any kind of planning.

Once the giggling had subsided, though, perhaps the leaders reflected on the fact that while Tsipras and Cameron had both held needless, divisive and risky referendums, it was the Greek leader that emerged into a more secure environment and was able to retain his job. Tsipras may have many faults but when he held the referendum, he left himself a tiny escape hatch: He said that a No vote was a mandate for him to return to the negotiating table to seek a better deal, not one to turn his back on Greece’s lenders and exit the eurozone. The idea of getting a better deal after the referendum was nonsense of course (and the plebiscite was held at great cost to Greeks, particularly because banks were closed for several weeks and capital controls enforced), but Tsipras allowed himself a route back to the negotiating table.

In contrast, Cameron had nothing. He held a simple Yes/No vote on a complex subject with no checks and balances. This meant that the decision to take the UK out of the EU was made by 36 percent of the population eligible to vote. “This isn’t democracy; it is Russian roulette for republics,” wrote Harvard University professor Kenneth Rogoff.

It also means that Tsipras proved himself a more skilful political tactician than Cameron, which is quite an overwhelming thought. You’re not laughing now, as UKIP leader Nigel Farage might say.

Then there is the nonchalance with which those involved in the Leave campaign greeted their portentous victory after spending weeks spreading lies and stoking hate. “You were only meant to blow the bloody doors off,” Michael Gove’s wife, Sarah Vine, told the former education minister the morning after the referendum. She used a famous line from the 1969 British crime caper The Italian Job. It was very reminiscent of the “Honey, I shut the banks” that Greece’s ex-finance minister Yanis Varoufakis reportedly told his wife after Greek lenders were forced to close their doors in the wake of Tsipras calling the July 5 referendum. However, a key difference here is that Varoufakis was no longer a minister from July 6 onwards, while Gove was running to be British prime minister.

This sudden implosion in the UK, which includes roughly 40 billion pounds being wiped of the value of stocks on the FTSE 350, a credit downgrade, the possibility of financial institutions relocating and numerous businesses holding off on investments, gives an opportunity to reassess what has happened in Greece over the last few years. Perhaps the Greek political system showed more durability and poise than we had thought until now, especially given the immense pressure that was put on it by the economic destruction domestically and the anxiety felt abroad. Possibly Greek society proved more mature and less hateful than it gets credit for. Maybe Greece was the jelly that wobbled, rather than the meringue that caved in on itself.

While we reassess things, Greeks are in the strange position of staring at the mess Europe is in and, for once, being able to say that they did not cause it. Of course, any relief will be momentary as the chaos in the UK will find a way of working itself through the continent with damaging consequences. Greece knows at least this much from its travails in recent years.