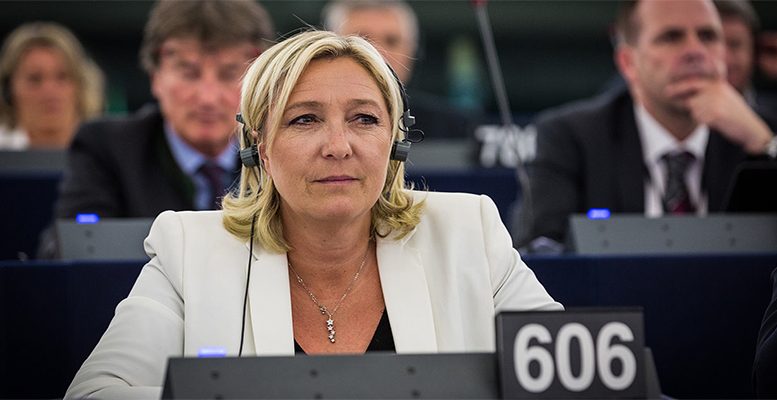 There is an increasing risk in French politics that Marine Le Pen will be victorious, which is fuelling a rise in the differential between the German and French bond to a four-year maximum, as can be seen in the FT graphic: 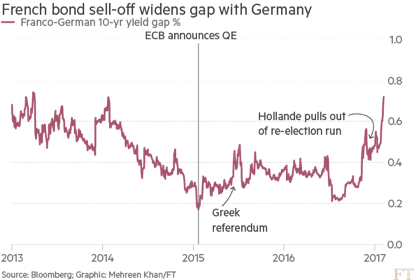 So, from 0.1% in better times, the differential has soared to 0.778% (record high: 1.159%), due to concerns fuelled by the failure of right-wing candidate Fillon, hounded by the authorities for having employed his family, wife and children, in parliament, where allegedly they did not lift a finger. Fillon was the big white hope of the markets versus Le Pen, who has promised to give the French back the franc, and redenominate 2 billion euros of debt in francs, which would effectively be to default…apart from the fact that other countries would follow suit, which would mean an end to the exalted euro.

This isn’t very reassuring, is it? Well, most people persist in not seeing what’s right in front of them, an idol with feet of clay, and they still say that the UK has made a terrible mistake with Brexit. We’ll see. For the time being, it’s the UK which did the right thing, staying outside the single currency. Apart from the standpoint of a creditor, it doesn’t have to think about the nightmare of a debt in euros, the amount of which I have no idea about…

The markets are increasingly more sensitive, as can be seen in the following graphic: it’s not just France, and there are no political candidates left who do not pose a threat.

Meanwhile, look at Germany which is heading in the opposite direction, a clear sign that it is not a common factor like the risk of inflation, but political uncertainty linked to tensions in the euro. The endless problem of Greece is another factor. Its bailout needs an overhaul this year which is not at all clear, given that the IMF has completely broken away from the EU.

Clearly if these trends get stronger, it will be Armaggedon, with the risk premiums exploding as they did in 2012…and even more. Draghi has said that the ECB is not there to reduce the risk premiums between countries, although indirectly it has done this by favouring the countries in southern Europe with its quantitative monetary policy expansion. In any event, the announcement of a possible end to its policy in April this year – at least there has been no announcement it will be renewed – has not stopped market sensitivity from increasing.