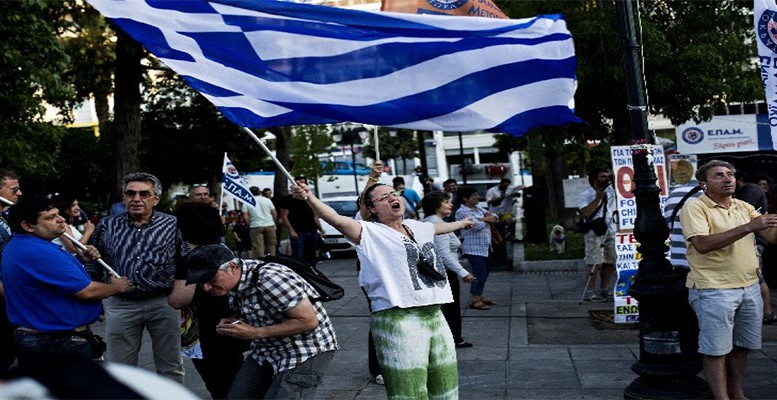 The euro was not imposed on Greece. It was something that Greece joined of its own accord.

The possibility of Greece leaving the euro has been greeted by some as dealing a blow to the eurozone project because it supposedly ended the notion of the euro being “irreversible.” But nothing in political life is irreversible, even though empires like the Byzantine and Ottomans lasted a very long time. “Irreversibility” was always a legal fiction, and fiction is not a sound basis for an economic policy.

The euro is a contingent compromise, where members trade some short-term losses for greater long-term gains. A euro, where rules were easily broken, would not endure.

I agree with those who say that, eventually, some Greek debt will have to be written off. That is both financially necessary and morally just. But that can only be contemplated when the Greek political and administrative system has reformed itself and is capable of benefitting from a write-off—and not by looking at it as a precedent for a further write-off later on. We are not there yet.

The crucial difficulty seems to be that the Greek state does not work. The fact that Prime Minister Alexis Tsipras’ offer of reforms had to be crafted not by Greek civil servants on their own, but with the help of French officials tells its own story.

Some complain that elements of the bailout package involve intrusion on Greek “sovereignty.” But a state is only sovereign to the extent that it is capable of performing the functions of a state and of fulfilling its internal and international responsibilities. I believe Greece needs help in this regard, and it would be good if the World Bank and the International Monetary Fund (IMF) were involved in helping Athens reform its public administration.

Recapitalizing Greek banks will be a major task. Interestingly, the biggest exposure to Greek banks is held by British banks. The United Kingdom is not in the euro and is not contributing to the Greek bailout, which could be regarded as unfair.

Some argue that the austerity Greece is going through to meet its international obligations is damaging the country’s economic growth prospects. In the short-run, this is true. But fueling temporary growth by taking on even more debts would not be the answer. That would weaken long-term growth prospects due to the additional debt service it would entail.

The important way of  improving growth prospects is by generating confidence. If people believe the future will be better and can borrow money to invest in it, the economy will grow. With renewed confidence, some of the money that Greeks themselves have moved abroad will then come back to Greece. If the bailout terms are fully and quickly implemented—by both Greece and its creditors—confidence will be restored, especially if it is rewarded  by a prospect of some conditional and staged debt write-offs.

Meanwhile, Greece is in close proximity to the biggest refugee crisis in world history, caused by the Syrian and Iraqi civil wars. More migrants are arriving in Greece from the Middle East than those heading to Italy from North Africa. Sixty-five percent of refugees in Greece are Syrian.

Greece’s neighbor, Turkey, is already providing shelter for 1.8 million Syrian refugees. Meanwhile most Western countries are reluctant to take in any refugees. Greece, because of its geographic position, does not have that luxury.

The European Union (EU) should reevaluate its development aid programs to help middle-income countries—such as Greece, Turkey, Lebanon and Jordan—cope with the huge burden of major refugee inflows.

Some EU countries like Germany and Sweden are hosting many refugees. But most are keeping their heads down and doing little or nothing.

Be the first to comment on "Is the Greek Bailout Too Severe?"