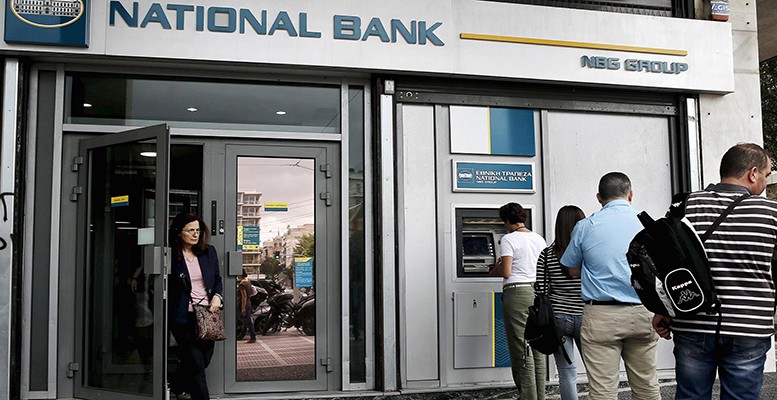 As the Greek real economy has been turned into a predominantly cash-based economy, citizens and businesses have reluctantly had to learn to live without domestic banks being open for business. What this experience has exposed so far is revealing in terms of the country’s social fabric and society’s relation to commercial banks.

* The long queues of pensioners waiting in the July heat to gain access to a bank branch in order to collect parts of their pension in cash has highlighted how many people in Greece either do not own a cash card for electronic withdrawals or are not familiar with the glossy proclamations of fast-track e-banking.

* Reports have surfaced suggesting that citizens have started to turn to bitcoin transactions and outright barter trade.

* The mostly patient and resigned behaviour of citizens waiting in front of bank ATMs illustrated that today’s bank runs need not include panic and endlessly long queues that make for front-page photo shots in newspapers or social media.

* In anticipation of possible soft “bail in” legislation, which was adopted in Wednesday’s omnibus bill, citizens and businesses started to draw down their current account deposits as much as possible. Nobody wants to be caught off guard with too much liquidity in their bank accounts if and when current speculation about a bail in may become the harsh reality in the near future.

What these different reactions and rational calculations of many Greek citizens tell us concerns predominantly the fragile commodity of trust in commercial banks. The past three weeks have altered the modus operandi of how we judge such banks and try to do business with them.

More importantly, the confidence in the sector, in the reliability of domestic lenders being able to deliver the requested banking services to citizens and businesses on time, has been broken. The repair work that will need to start once banks reopen for business will take months and cannot be fast-tracked through marketing, rebranding or hand outs of free water bottles.

In fact, as the Brussels agreement between the international creditors and the Greek authorities underlines, a sizeable part of the proposed third financial assistance package will be reserved for bank recapitalisation needs and possible resolution requirements. The short version of this commitment implies that the domestic banking sector in Greece, as it exists today, will no longer be the same in the months ahead. Just consider the following developments:

* The amount of deposits that have left Greek banks since November 2014 is of such a magnitude that Greek lenders will have enormous difficulties in enticing citizens and businesses to return parts of that capital flight back to bank coffers.

* In the meantime, non-performing loans (NPLs) have continued to increase at an alarming rate. Most challenging in this respect is the fact that loans that were refinanced in the course of the past year are again starting to turn into NPLs. This does not augur well in terms of client repayment capacity in the coming months.

* The closure of Greek banks and the introduction of capital controls have contributed to the emergence of a shadow banking system in the country’s real economy. Money under the mattress, in safe deposit boxes or transferred abroad in recent months will not easily return to accounts whose holders cannot know if a soft bail-in option may have to be implemented in due course.

The four systemic banks in Greece will have to prepare for a rigorous stress test by the European Central Bank (ECB) in the autumn of this year. The necessary scrutiny of lenders’ balance sheets, their level of reliance on deferred tax assets (DTA), NPL dynamics and the consequences of higher funding costs because of their months-long reliance on ever-rising emergency liquidity assistance (ELA) all combine for a confrontation with rather uncomfortable truths.

Whatever policy recommendations or restructuring obligations may emerge from the ECB’s stress testing exercise, the four largest lenders would be well advised to start game planning now. Their list of prior actions could include calls for capital increases, demands for portfolio restructuring, downsizing their branch networks, further selling of non-core assets and possibly merger or resolution obligations. In short, the Greek banking landscape looks set for a major overhaul leading into 2016.

The fact Greek banks have reopened does not automatically mean that they will also be fit for purpose. The optimistic assumption that domestic lenders will rush to turn on the lending taps to the real economy in order to maximise available funds from the proposed 35 billion euro investment package will not square with reality on the ground.

The European investment scheme is massive and includes front-loading availing resources through commercial banks. But the potential intermediary institutions such as the European Investment Bank (EIB) or the European Bank for Reconstruction and Development (EBRD) will not enter any time soon into contractual relationships with domestic lenders whose capital basis is uncertain and whose balance sheets display increasing signs of deteriorating asset quality.

Greek banks hardly threaten their eurozone peers in terms of direct exposure. But the harm they could do to the real economy in Greece should not be underestimated. In view of declining trust in financial institutions, their operational capacity will be hindered by underlying balance sheet legacies and tested by domestic challenges concerning the future architecture and mandate of Greek banks.

Be the first to comment on "For Greek banks, it’s business as unusual"