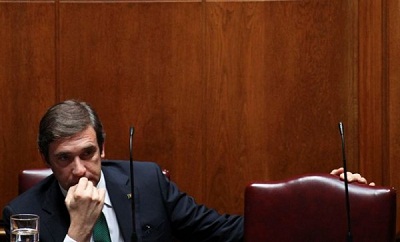 By Fernando Barciela | News that Portugal’s major cities grounded to a halt Thursday pointed at an initial victory for labour unions, which began today a 24-hour strike against austerity measures agreed by the government in return for an international bailout. Demonstrations and rallies were also planned in 38 cities and towns across the country, including Lisbon. Six months have been enough for prime minister Pedro Passos Coelho to become the most unpopular politician in Portugal in recent decades.

The hostility generated by his policies is so great that every week that passes makes it more difficult for him to go outside. During the ‘Queijo da Serra’ fair, in a border town with Spain, he was met by several thousand angry people who could not stop throwing insults. In Matosinhos, in northern Portugal, after having been called ‘aldrabao’ (liar), a woman tried to hit him.

But to qualify Passos Coelho de ‘aldrabao’ is an exaggeration. The current prime minister presented the voters with the only gift that was available, austerity, and a large majority of Portuguese took it. Passos, who replaced Socialist Jose Socrates, the one who had refused to call the rescue, had no choice but to accept European aid, a package of €78 billion euros that the PSP (Portuguese Socialist Party) would end up supporting in the ‘Assembleia da República’.

How does one explain then that, in the latest polls, seven out of ten Portuguese reject his policies? The prime minister urged them so insistently, before and after being in office, that the only solution to the crisis was austerity that most believed in it as a sort of magic solution. But the results, at least for now, remain to be seen. Or they are clearly catastrophic, as the pessimists complain. Even though with Passos the deficit has fallen from 9.1% in 2010 to 5.6% in 2011, after growing in 2010, GDP fell by 1.3% all in a single quarter, the fourth, bringing the country into 2012 with a drop of 2.7%. This year, the prospects are worse. Brussels talks about a contraction of 3% and Citigroup forecasts say 5.5%.

The goal, he repeats, is to reach a 4.5% deficit this year and begin to recover in 2014, when he expects a GDP growth of 2% supported in part by exports, which in 2011 saw a resounding increase of 13.3%. His determination has been praised by the European Commission, the German chancellor Angela Merkel and the IMF, which compare his rigour to the rebellious attitude of the Greeks. But this has not been any good to placate the markets, which still require 13% yields on 10-year bonds. As Passos’ disillusioned voters, the markets seem to harbour many doubts. The Kiel Institute for the World Economy has warned that a 2% growth will not be sufficient to pay the Portuguese accumulated debt. Portugal would need to have a surplus of 10% per year to reduce its public debt to manageable levels.

As if all this was not enough, we should add that the decision of Spain’s president Mariano Rajoy to ease deficit targets from 4.4% to 5.8% felt like a bombshell in Lisbon, where he was applauded by commentators while it contributed to deteriorate a little more the position of Passos.

He is running out of room to maneuver and is rapidly losing authority. The attempts at rebellion sprout everywhere and under any pretext. On February 28, the day when members of the Troika visited Lisbon, Passos decided to break with Carnival’s tradition of giving the day off to civil servants so as to prove to the Brussels supervisors that ‘Portugal is not Germany’. While many public workers ignored him, of those who went to work, some came in to their offices fully dressed up.