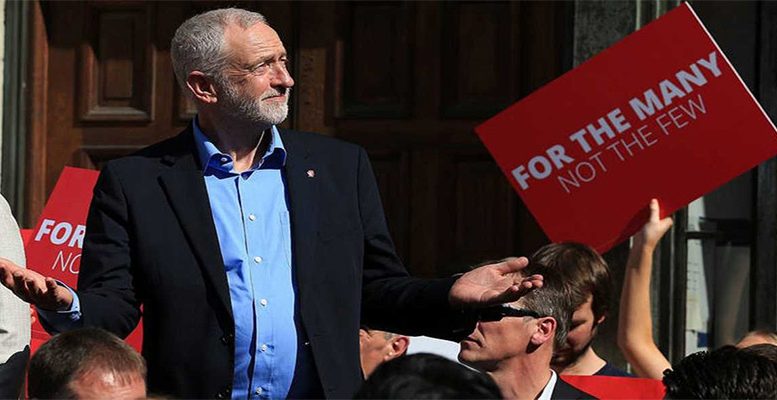 Nick Ottens via Atlantic Sentinel | Britain’s Labour Party has narrowed the gap with the ruling Conservatives in the polls, going up from an average of 25 percent support when Prime Minister Theresa May called an election last month to nearly 35 percent.

Support for May’s Conservatives hasn’t come down from 45 percent. They are still expected to prevail, but with a smaller majority than seemed likely a few weeks ago.

Labour’s surge has come at the expense of the Greens and Liberal Democrats, who are both polling in the single digits.

Stephen Bush argues in the New Statesman that the reason Labour is up is that Jeremy Corbyn, its leader, is running a surprisingly competent campaign.

May, by contrast, has underwhelmed with stale speeches and a policy U-turn.

I think Bush is wrong to accuse May of lacking David Cameron’s “instinctive sense of what it is that people dislike about the Tory party.” It is rather that, unlike Cameron, she takes the center for granted and has decided to compete with the United Kingdom Independence Party.

As Bush puts it, the Conservatives thought they had two insurance policies:

The first was Jeremy Corbyn and the second was May’s purple firewall: the padding of her lead with voters who backed UKIP in 2015 but supported the Conservatives in the local elections.

With UKIP down to 4 percent support, this still looks like a good bet.

And there are reasons to doubt Corbyn’s newfound popularity will last.

Polling expert Leo Barasi cautions against focusing on the horserace numbers alone. “Pay attention to the other numbers and other evidence,” he writes:

Matt Singh sees another reason to be skeptical, writing in the Financial Times that Labour’s cannibalizing of the Green party does it little good in competitive districts where the Greens weren’t popular to begin with.

Racking up more left-wing votes in metropolitan areas is electorally useless — something Democrats in the United States know all too well.

To threaten the Conservatives’ majority, Labour would need to pry middle-class votes away from them in rural and small-town England.

Labour does have policies that appeal to such voters, including scrapping tuition fees for higher education, raising the minimum wage to £10 per hour and renationalizing Britain’s mediocre railways.

But the Conservatives will make sure centrist voters remember all the things they don’t like about Corbyn before they vote in June.

May herself has accused the Labour Party leader of blaming terrorist attacks like the one in Manchester on the British themselves.

“I want to make one thing very clear to Jeremy Corbyn and to you and it’s that there can never, ever be an excuse for terrorism,” she said.

The diatribe was a little over the top. Corbyn had only questioned the wisdom of continuing the War on Terror in the Middle East. But he has in the past linked Islamic terrorism to Western and Israeli actions.

A recent interview with the BBC’s Andrew Neil reminded viewers that Corbyn was apologetic of Irish republican terrorism as well. Instead of allying with the left-wing and Irish nationalist Social Democratic and Labour Party, Corbyn picked the side of Sinn Féin and the Provisional IRA in the 1980s, both of which sought to bring about a unification of Ireland through violence.

In the same interview, Corbyn refused to commit to keeping Britain’s independent nuclear deterrent if he is elected prime minister. Few voters share his belief in unilateral disarmament.

Corbyn claims he is no pacifist, but he has opposed every war Britain has fought in since he was elected to Parliament, including the Falklands War. Only last year, he called for a power-sharing agreement with Argentina, which continues to claim the archipelago in the South Atlantic despite losing the 1982 war.

Remind voters in Middle England of those views and let’s see what happens to Labour’s poll numbers.