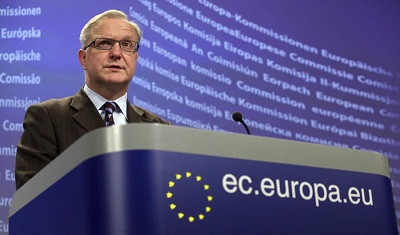 By Juan Pedro Marín Arrese, in Madrid | The European Commission has developed a masterful command in saying things it does not believe in. The latest growth forecasts stand as an example of this hollow rhetoric. Reading the small print it seems clear the Commission sticks to obviousness in conceding we are stuck in a sharp downturn. When it comes to guessing what might lie on stock for the rest of the year, you are confronted with mere wishful thinking. Everyone knows that advancing predictions on what might happen is far from an easy task, especially when applied to future events. But anchoring a mild recovery on expectations that current deterioration will peter out soon, amounts to trivial forecasting.

The US will likely deliver a sound growth, if only because money is bounteously poured in election years.China and other large emerging economies will also continue their investment effort. Forceful growth and cycling share the same need to keep on pedalling without respite to avoid falling down. Yet counting on an export led recovery in Europe seems overoptimistic should consumption fail to pick up. And not a single hint supports that claim.

Why then is the Commission leaning on a half-filled bottle assumption as regards growth prospects? It may respond to a deliberate attempt to avoid dampening still further sentiment on economic perspectives. But there is a far less innocent answer to the question. As pressure is mounting to relax fiscal consolidation and deficit targets, depicting a dark scenario would fuel such a move. Forecasting a recovery to be on track seems the safest way to slash any temptation to loosen current rules on tight budgetary control. It sends a clear message to peripheral countries as to the need to perform their pending homework no matter the sacrifices it might involve.