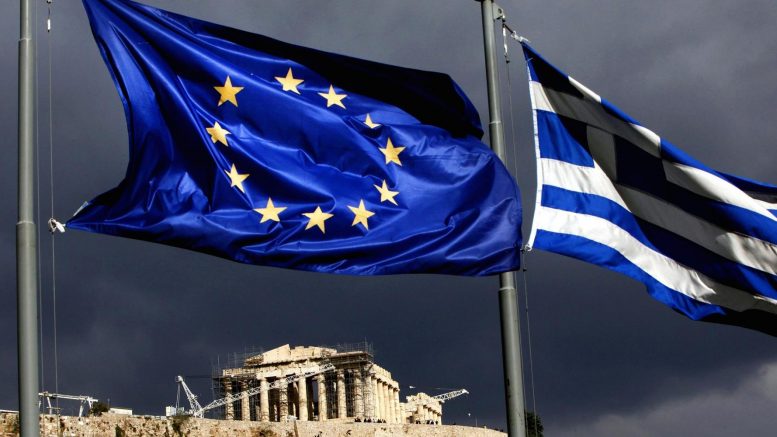 Greek and EU flag in Athens.

The French say: “The absent are always in the wrong.” The saying is quite correct, at least as far as the unification process in Europe is concerned.

Greece has been a member of the European Union for almost four decades but, sadly, the parochialism of the Greek political elite (bar a few exceptions) has been a main feature of the country’s participation in the project.

This might seem like a harsh view, but it is certainly not unfair. What has been happening over the last few months regarding eurozone reform is a characteristic example of this tendency. On last December 4, eurozone finance ministers concluded a partial agreement on a series of key issues: a) the role and tools at the disposal of the European Stability Mechanism (ESM), b) what will happen if a bank needs to go through the resolution process and there is not enough money in the relevant fund, and c) the eurozone budget’s goals.

The responses provided by the participants are not the same and are not free of ideological influences. But what is the position of Greece and of the political parties, and why? The main feature of the Greek stance so far was the complete absence of any discussion whatsoever in the media, the broader public sphere, and even Parliament.

If one excludes references to the issue in an article by Finance Minister Euclid Tsakalotos in Le Monde in January and two speeches by Prime Minister Alexis Tsipras in September 2017 and 2018 (which cannot exhaust the room for debate anyway) there is no other indication that the Greek political elite has been bothered with this issue. Which party represented in Parliament today has dedicated a session of one of its decision-making bodies to this matter? Even Greek Parliament seems disinterested.

If someone looks for references to this issue on Parliament’s website, where there are archives of its work, they will notice that the absence of such material in 2018 is conspicuous by its absence. For example, only in one joint session this year (on February 9) did the Economic Affairs, European Affairs, Foreign Affairs and Defence committees discuss this issue.

Even then, though, no report was issued. Speeches were made but they were general (since detail requires work and not just slogans) and a report that listed a) the issues, b) the positions and arguments and c) the conclusions (even just those of the governing coalition) was not compiled. Justhotair, inotherwords.

Greek politicians’ counterparts in other EU countries dedicate many sessions to such issues. They invite not just the competent ministers but also experts from outside Parliament, such as academics, representatives of society, etc. Also, in the reports that are subsequently published, the full arguments are set out, backed up by evidence and a conclusion that allows voters to understand what was said, what was decided and on what basis.

Apart from the depressing state of Greek parliamentarianism, does the absence of such practices also show how shallow much-advertised pro-Europeanism is in Greece?