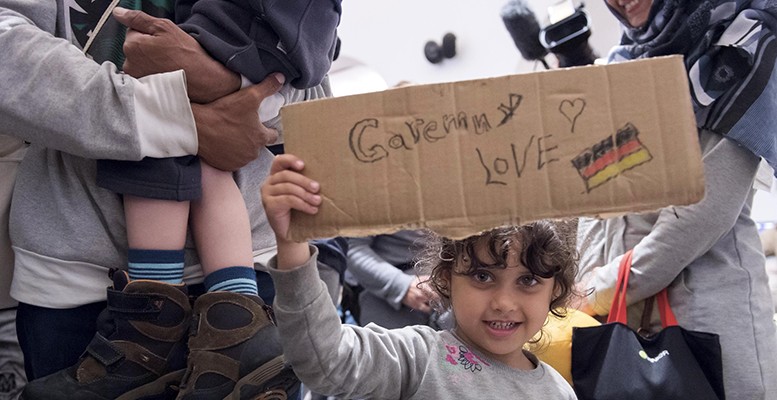 People trafficking. The more or less peaceful demonstrations of the “Arab Spring” were violently suppressed by the government in Damascus, leading finally to an outright civil war during 2011. So in 2016, it’s now entering its sixth year. Every war leads to the displacement of civilians. In Syria this could now account for – there are a lot of different figures – half the population of some 18 million. The human crisis is extremely intense. Millions of Syrians are gathered in refugee camps in adjacent countries and, in 2015, hundreds of thousands have made their way to Europe along with refugees from Iraq or from other even more distant countries. The problem has been left in the hands of a Europe which is not prepared, having only planned to generously accept 120,000 Syrians.

We read horrifying accounts of this march on Europe, but we know very little about the shady organisation which facilitates it. Using informal networks, the refugees find out which Turkish port they need to go to (for example, Bodrum in the Aegean), where they wait until there is a ferry available to make the crossing (in this example to the nearest Greek island, Kos, two thousand nautical miles from Bodrum).

It seems as if no-one wants to take legal or moral responsability for these services, with the dramatic consequences which we  hear about daily in the media. But each refugee has had to pay thousands of euros for a future service. And there is nothing  improvised here. It’s a formidable, uncontrolled human trafficking business in the Mediterranean, within sight of a Europe which appears to be unable to act despite its strong rhetoric about human rights’ violations, the cry from its website ‘Together against trafficking in human beings’ and its fears about terrorist infiltrations. The involvement of Nato’s Standing Maritime Force 2 (approved February 11th) is to make up for the EU deficiencies, but with only disuasive objectives: although we don’t (yet) know its terms of reference, NATO immediately clarified that its mission would be limited to surveillance and providing critical information. Its role was not to stop or send back any boats. The planned Greek-Turkish naval collaboration may be the most interesting result of this initiave, as a collateral political effect.

– Without an external border. The EU is not a unique State, but it does have peculiarities which reflect the willingness of various countries to share values and political and economic approaches to obtain advantages that are only possible on a scale larger than just one State. It’s fundamental to physically identify the geographical area covered by this integration initiative, namely, the EU border to the outside. The EU needs to be able to defend this with the same enthusiasm as any sovereign State, and with urgent necessity in the case of the Schengen countries, which allow its residents full internal freedom of movement.

It’s clear that European politicians were guilty of, and continue to be guilty of showing an amazing lack of foresight throughout the long formative period of regulations and institutions which we are still experiencing. For example, they did not take into consideration the importance of a outside border because they did not foresee the threat of a mass peaceful “invasion.”

Despite some minor experiences with African immigrants, nobody apparently thought that the consequences of the conflict in the Near East might unveil the vulnerable geographical configuration of Europe’s eastern border, based on some small Greek islands in the Aegean Sea which closely border on the coastline of a non-EU country.

The EU’s concern has been to unify regulations and procedures for a very specific, individualised control of political asylum seekers. The so-called Dublin System (updated in 2013) decides on the member country responsible for examining a request for asylum. In this way, and also using other means, the EU has coped with the demand from political refugees, although not without some run-ins with the European Tribunal of Human Rights. It has established that each case has to be dealt with by the country where the asylum seeker makes his demand. It’s easily understandable that this kind of “personal” administrative treatment is not viable when you are dealing with thousands of applicants per day, many of which would not even be candidates for political asylum. Furthermore, they cross the EU’s outside border in places without any kind of control or defence. It wouldn’t be entirely fair to criticise Europe’s politicians for not having foreseen the magnitude of the flight from Syria. What is a great pity is that many countries of the old Europe have shied away from contributing in any positive way to the European community’s handling of the crisis.

– Objective: Germany. The refugees seem to have their final destination very clear. Their arrival on Greek soil (and community soil) is only very rarely controlled and these islands are not at all prepared.  The authorities transport them by ferry and bus to the north of Greece, from where they can continue their pilgrimage to the borders of Germany. We know that the countries on the way have been not very willing to help, to put it mildly, and the difficulties of the journey have been relieved by volunteers and NGOs. In Budapest station you could hear the cry “Germany, Germany…Merkel, Merkel” (1 September 2015) and a few days later, the Chancellor made her emphatic statement “wir schaffen das,” when the number of refugees in 2015 already totalled 1 million, with another 1 million estimated for 2016.

– The Chancellor’s invitation. Merkel announced her government’s generous openness without any consultation or debate within the EU or in Germany. No other country came forward to get involved. But her encouraging cry was not received enthusiastically in her own country. Public opinion is worried about the consequences of effective integration in the job market – within 10 years, the majority of the workforce between 25 and 35 years would be non-German. But it is also concerned about the consequences of insufficient cultural integration, something which has not even been possible in the case of the significant Turkish minority, now in its second or third generation.

As often happens in the Germany of today, appealing to the Constitutional Tribunal is an outlet for the discontented. Merkel gave the authority (5 September) for a crowd of refugees, denied access through Hungary, to be allowed into Germany without any restrictions.  Various lawyers in Karlsruhe argue that the decision regarding which restrictions should or should not be applied to the entry of refugees does not correspond to the Chancellor, but to the Bundestag. Others, like the head of the Bavarian government, have defined the Chancellor’s policy as against the law and have threatened their own an anti-constitutional appeal. (German politics can  provide these kind of surprises: the threat of an appeal comes from a regional party which forms part of the national government). A bigger problem is the fear that the electorate will veer toward an anti-immigration populism in the three regional elections in March – Sajonia-Anhalt, Baden-Württemberg, Rin-Palatinado- , which could upset Germany’s political map a year before the next general elections (2017).

-And its subsequent clarification. All we know up to now is that the refugees aspire to living permanently in Germany. For that reason, the surprise over the Chancellor’s statement (at the end of January) that “we hope that…when peace is restored…you will go return to your own country.” Many citizens have written very scathing letters to the media, which is understandable. Given that peace is not a spontaneous phenomenon, Europe would have to “force” a stable peace in Syria, getting rid of the fundamentalist strongholds, and create an almost new Syrian State. It would have to overcome the underlying instability in a geographical region in which Syria has always been actively belligerent. And a massive amount of funding would be needed to reconstruct devastated towns and cities, if the pictures are anything to go by. Does the Chancellor really believe that the EU and Germany can take on a role of this scale? What would the German government do then? Could it legally expell previous refugees, many of them with jobs, and perhaps reasonably integrated with a family home? It’s no suprise that the phrase has produced strong reactions in Germany, between indignation and scepticism. Nor that the Chancellor’s popularity has dropped below minimum levels.