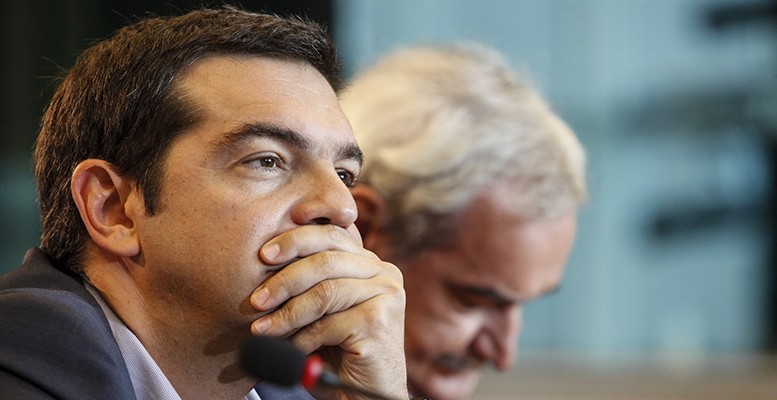 Nick Malkoutzis via Macropolis | In the shapeshifting world of Alexis Tsipras, it is difficult to know where things actually stand. His relatively brief time in power is littered with skins that have been shed and vows that have been broken. From the pledge never to sign a new bailout to agreeing a third programme, from the “mighty no” of the July 5 referendum to a “yes”, and from the “Go back, Mrs Merkel!” to trying to curry favour with Angela Merkel at every opportunity, Tsipras’s persona and priorities have fluctuated wildly.

Throughout this erratic and confusing period, though, the one relatively constant theme has been the Greek prime minister’s aversion to the International Monetary Fund. When relations between the SYRIZA-led coalition and Greece’s lenders were at a nadir last summer, before Tsipras capitulated and signed the third memorandum of understanding, he told Parliament that the IMF had “criminal responsibility” for the impact of the adjustment programme.

Even after agreeing the new package, and accepting the IMF’s role as part of the quartet of lenders, Tsipras continued to agitate against the Washington-based organisation. Last December, he described the fund’s position in the review negotiations as “not constructive”. A range of ministers joined him in publicly questioning the IMF.

Then we came to last Saturday, when WikiLeaks published a transcript of IMF officials discussing the Greek bailout talks. The government was indignant at the content of the conversation, even though it seemed to be largely in Greece’s favour, and Tsipras wrote to IMF managing director Christine Lagarde to ask if the fund was planning to engineer a Greek credit event to get its way.

The reference made by IMF officials in the WikiLeaks publication to an “event” that would force the Europeans to conclude a deal that would add up, and therefore include debt relief, is open to some interpretation. However, the context and content of the conversation does not support the theory that the fund was thinking of ways to dangle Greece off the edge of a cliff. Either way, Tsipras may have elicited a much more interesting answer, while not appearing to adopt the most extreme interpretation of the exchange, had he asked Lagarde to provide her explanation of what was discussed.

Instead, he received the blunt response from Lagarde that he was talking “nonsense”. This begged the question why Tsipras would want to clash head on with one of Greece’s lenders at such a sensitive stage of the review. And, why would he want to risk being put in his place in such a public and embarrassing manner by adopting an assertion that he could not back up?

The truth is that there may be no single or clear answer to these questions because it is not apparent that the government has a coherent position on the matter. Everything that happened on the Greek side in the wake of the WikiLeaks publication suggests a last, desperate attempt to create some momentum in the coalition’s favour before the talks reach their conclusion. There was nothing to indicate that it was part of a long-term, or even medium-term, strategy regarding Greece’s relationship with the IMF.

There are legitimate reasons for Athens to be sceptical of the IMF’s involvement in the programme. For one, it is less inclined to trust Greek forecasts or even preliminary fiscal results than the European lenders. This means that the fund, for instance, is reluctant to adjust its projection for a primary deficit of 0.6 percent of GDP in 2015, even though the Finance Ministry insists that the final figures show a 0.2 percent of GDP surplus. This makes a significant difference to the amount of fiscal measures the government would have to take to meet the magic figure of 3.5 percent of GDP primary surplus in 2018, which was set as the target in the third bailout.

Also, the IMF is more inclined than the European lenders to question the quality of some of the measures put forward by the Greek government. For example, it is against a heavy reliance on increases in social security contributions to meet pension targets, preferring cuts to retirement pay, and does not trust the projected fiscal results of a series of supplementary tax measures (which aim to raise one percent of GDP), including taxes on gambling and internet connections. The IMF believes that the targets set by Athens are questionable because the introduction of all these new or higher taxes will stifle economic activity and bring in less revenue.

Thinking in purely political terms, Tsipras seems to believe that the IMF’s presence is detrimental to his prospects in the short-term. By pushing for more concrete measures now, it will make it more difficult for him to get the fiscal adjustment package through Parliament and keep his coalition intact.

By trying to sideline the IMF, he risks losing the strongest international advocate he has for debt relief but there is an argument to be made that the debt issue does not have to be settled now and that easing up the fiscal pressure now would benefit the Greek economy, not just SYRIZA’s prospects.

However, a key element to the WikiLeaks transcript is the director of the IMF’s European department, Poul Thomsen, describing the fund’s readiness to accept a lower fiscal target (1.5 percent of GDP vs 3.5) if the Europeans provide debt relief. It is true that the IMF would still demand credible (and politically uncomfortable) measures to reach this target but the adjustment needed would be smaller than the one that has been discussed until now.

There is also another important aspect to the complex equation; for some of the eurozone member states (Germany in particular), the prospect of a Greek programme without the IMF is a non-starter. Merkel made this much clear following her meeting with Lagarde last Monday and Finance Minister Wolfgang Schaeuble gave his personal pledge to German MPs that the fund would be on board last summer, when some in the Bundestag had serious doubts about approving the third package.

Given that Germany does not seem willing to proceed without the IMF, which means there can be no approval for disbursements if the fund is not on board, and Greece will hit a hard stop in July when it will not have enough money to meet its debt repayments, Tsipras’s approach is puzzling. Then again, maybe it is just a question of time before it morphs into something completely different.