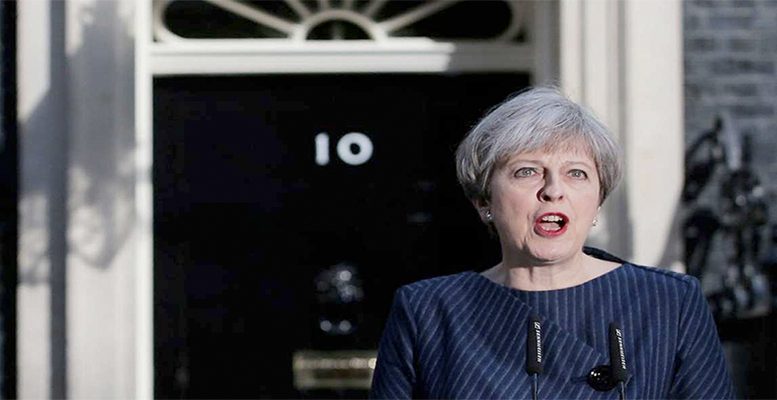 UK Prime Minister Theresa May’s call for a general election on June 8 is a very important coup for the Brexit process. It assumes these elections will allow her to bring together a lot of favourable intent, when the opposition is trying to find itself. With her majority reinforced, she will be in a stronger position to negotiate and avoid elections, on the cards for 2020, possibly poisoning the atmosphere at a crucial point in the Brexit negotations.

On the other hand, the EU cannot do the same, on the contrary. It sees the upcoming elections in France, Italy and Germany as an inevitable nightmare, which will only bring increasing weakness.

For the time being, May’s move is as master stroke as she will present herself for re-election in June with a more united parliament and an economy which is working. And, furthermore, it’s working thanks to the fact the pound stayed out of the euro. Here you can read her official announcement, where she clearly states what her aim is. I was always sceptical about the amazing advantages of the EU compared with a Great Britain “in ruins”. I believe that unity is the most important force, not the size of the separated entity.

Brexit was proposed in a cruel fashion, with a dog face, without any concessions. The EU’s main objective is that the UK doesn’t leave at all, so as not to give a bad example to other countries. For its part, the UK wants to get free of EU legislation to recover full sovereignity of its parliament. So they have begun to poke each other in the eye, then later we’ll see the ear biting and other delights of a prison brawl. Anything goes.

In the end, I believe the UK will win, although both sides will be seriously wounded. What I mean is that within two years the UK will be a nation and the EU, in the best case scenario, will be a ghost ship. The EU is a group of countries with different interests, guided by a superstructure which represents those interests very badly. And not all countries represented will be in agreement with some of the EU’s measures. For example, on the issue of immigration, many of them will sooner or later agree with the UK. Some already are: the most exposed to an invasion: Hungary, Poland (which opposed the re-appointment of Tusk, the Polish president of the European Council, the first time this has happened) and countries in the region.

With the UK there is some logic behind it, the logic of Confederate Europe, not federate. The first, which was De Gaulle’s idea, imposed clear limits on the removal of sovereignity from the member countries. These limits have been wantonly broken, like in the wretched monetary union, and sooner or later – today the UK, tomorrow France – countries will want to recover something which allows them to win elections by offering their voters something. Elections can’t be eternally won by using the slogan “Europe wants it,” even though it’s an aberration.

The reaction of the British press to May’s decision has been almost completely unanimous in declaring it as very sound.