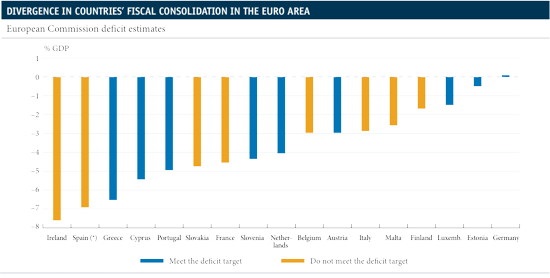 The outcome of the Italian elections in the last week of February has highlighted the fragility still affecting the euro area. The absence of a clear majority increases the risk of the fourth largest country in the European Union being unable to govern itself. This uncertainty has resulted in new turbulences in the financing markets, particularly in periphery countries. The process of reinforcing the common European project has yet to become consolidated.

The first two months of 2013 have passed without too many setbacks in terms of euro area governance. Throughout this period, work has continued on laying the foundations for future banking union. Foundations that should be defined at the European Council meeting this June. Among those aspects causing most debate is the direct recapitalization of banks via the European Stability Mechanism (ESM). This measure aims to sever the link between bank debt risk and sovereign risk. This does not appear to be a simple process, however.

Another of the agreements reached in February was in the definition of the new Multiannual Financial Framework for the period 2014-2020. This limits the spending planned for these seven years to just under 960 billion euros, 3.5% less than in the seven previous years.

With regard to the coming months, we expect the political agenda to be more dynamic. In addition to the aforementioned advances in the area of banking union, the Eurogroup must also agree on the bail-out mechanisms for Cyprus. Although this bail-out is small in size, approximately 16.7 billion euros, some important details have yet to be decided, including a possible write-down of public and bank deposit debt.

Another aspect that will occupy the political agenda is the supervision of fiscal consolidation in euro area countries. As can be seen in the graph, there is a wide divergence between the public sector financing needs of the different countries in the Monetary Union. According to European Commission estimates for 2012, more than half the euro area countries posted a fiscal deficit above 3% last year. Of note are Ireland and Spain, with deficits of 7.7% and 7.0% of their gross domestic product (GDP), respectively. The Spanish case, however, does not include losses due to the bank rescue package. Moreover, these two countries did not meet their deficit targets set by the Commission.

Over the next few months, the stability programmes for euro area countries will be published. These will contain the deficit targets for the next few years. It is expected that, in some cases such as Spain or France, the European Commission will ease the extent of fiscal consolidation required over the coming years. Another aspect to take into account in this area is the approval, by the European Parliament, of the two-pack. These two measures, which will come into force in the summer, aim to strengthen the euro area’s supervisory mechanisms and, once they come into operation, will allow European institutions to become involved in drawing up national budgets.