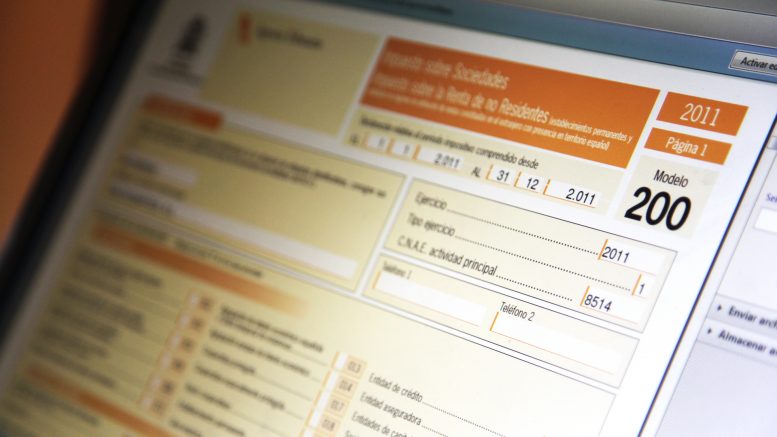 Experts in tax issues are busy these days trying to explain what has happened with corporate tax, the revenues from which have fallen no less than 85% in the January-July period. The Tax Office only raised 433 million euros compared with 3.011 billion in the first six months of 2015.

A huge plunge if ever there was one.  Looking at the revenues of those seven months over the last 20 years there is nothing to match it, not even in the worst years of the crisis when revenues from this tax stood at over 5 or 6 billion euros between January and July. Not to mention 2007 when the amount reached 11.246 billion euros.

The fall in the amount collected from this tax on companies’ results, along with the drop in personal taxes, was one of the reasons why aggregate tax collection declined 1.8% to 106.4 billion euros (almost 2 billion less) and Spain was not able to comply with its deficit target.

The reasons for this drop are not at all clear. Nor are the experts’ explanations. To start with, everything points to the fact that the plunge in the amount of taxes raised even took the Treasury by surprise. It had expected exactly the opposite, an increase of 20% for this year. So a complete surprise! And it wasn’t because the Treasury was counting its chickens before they hatched. But it was actually because the revenues and earnings declared by companies rose 12.6% in the first quarter. So it’s logical to expect that the taxes they need to pay will be along the same lines.

The first explanation is that part of the plunge was due to the fact that the system for payment by instalments (April, October and December), which had existed up until this year, was suspended. The end of these payments would account for about 48% of the fall in tax collection. And it’s been shown that another significant part of the drop in revenues was due to the government’s last tax reform. This is now branded, logically, as reckless, including the afore-mentioned payments by instalment.

For example, the reform eased the nominal rates which declined to 28% from 30% in the case of large companies. Experts also attribute the huge drop in tax collection to the fact that companies have tried to take advantage of all the possibilities which the legislation offers, not to commit fraud, but to pay the mínimum amount, with the law to support them. Practises which are facilitated by the mass of allowances, deductions and compensations which erode tax bases and fuel tax evasion.

And not forgetting that many companies are now making up for the losses incurred during the crisis years or that the earnings of many large firms – and this is a decisive factor – are not generated so much in Spain, where their revenues are not particularly buoyant, but more from abroad. Furthermore, as a result of double tax agreements, if they pay overseas, they are not going to pay here. The problem is that this means around 20 billion euros a year less for the Treasury coffers.

Everything seems to indicate that it’s about volunteerism. In 2014, the government approved ambitious cuts in both personal and corporate tax, which were to be implemented progessively in 2015 and 2016, supporte by confidence that the strong economic growth was going to more than offset the decline in tax collection. So much so that the PP itself didn’t show much resistance to Ciudadanos’ demands, during the negotiations to reach a parliamentary agreement ahead of Mariano Rajoy’s unsuccessful bid for a second term in office. In fact it appeared very much prepared to reform the system with the aim of making companies pay more, something which was heavily criticised in liberal circles but which now seems inevitable.

The problem is not that the 2.5 billion euros not collected via corporate tax is going to prevent the 2016 deficit target from being met. It’s that the situation is unsustainable if the caretaker government wants to meet the obligations imposed by Brussels to cut the deficit from 5.1% in 2015 to the 4.6% estimated for this year.

From that point that the government has decided, to pacify Brussels (which is demanding effective measures to reduce the deficit), to bring forward part of the corporate tax payments for 2016, which should be made next year, to this year: a total of 6 billion euros.

As can be imagined, companies have screamed blue murder over this unexpected emergency, which is almost like a betrayal. They didn’t count with having to pay out that money now, and it does not suit them at all. Various large companies in the country have already complained, indignantly, to the Spanish Businesses Association (CEOE) for the “robbery.” They have complained that they will have to get into debt with their banks to pay the tax and have also warned that the ratings agencies might cut their rating due to this unexepected payment.

It seems that no-one can convince Finance Minister Cristóbal Montoro to give up, now, trying to make them pay that 6 billion euros given that he, at the same time, has his hands very much tied. The question is that if there is no change in the current regulations regarding corporate tax, perhaps next year the companies will recover – via  – a good part of that 6 billion euros when they pay their taxes before July 25 next year. That’s true, but at least perhaps it will “save” the limit on the 2016 deficit. At the end of the day, what happens in 2017 is far off, very far off.