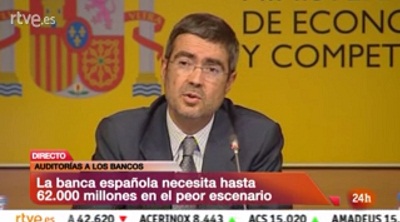 MADRID | Estimates from consultants Oliver Wyman and Roland Berger show Spanish banks would need capital up to a maximum figure of €62 billion to offset a stressed scenario. The results of  the €2-million independent evaluation of the sector were reported in a joint press conference by the deputy governor of the Bank of Spain Fernando Restoy, and secretary of State for

These sums derived from the auditing exercise are larger than the €40 billion in capital requirements calculated by the International Monetary Fund and will serve as a basis for the exact request for aid that the Spanish government will officially make to the European Union.

So far, the Spanish government has agreed with Brussels to receive up to €100 billion to recapitalise banks, but following the results of these stress tests it is expected that Madrid will formally request in the coming days the amount needed by the financial system.

The finance ministers of the euro zone on Thursday would have discussed the conditions of the bank bailout in Spain, which could apply not only to entities that receive assistance but the entire financial system, with stricter requirements on regulation and supervision.