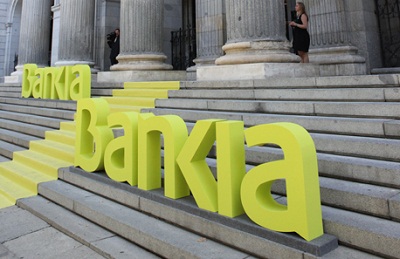 MADRID | Rescuing BANKIA will contribute to cut short doubts on short-term Spanish banking solvency. It was no secret that BANKIA was thrown in deep waters by the demanding government requirement to uplift real estate portfolio, having the dubious merit to top the list of entities laden with bad loans. Its intention to mend this state and play on its own gathered widespread disbelief, as big potential partners turned their backs at the prospect of merging with such a lame duck. Yet, BANKIA does not face a solvency crisis. It rather suffers from blatant inability to reap enough net margins to feed required provisioning and score comfortable profits. In the long run, this shortcoming makes it particularly vulnerable to any external shock not to mention the expected deterioration in assets, should the current downturn continue to inflict damage on activity and debtors capacity to meet their commitments.

It may come as a surprise that the Bank of Spain, only a few weeks ago, cleared its adjustment plan to meet €5 billion in required provisioning and additional core capital. BANKIA expected to perform the trick through a disposal of its fat industrial portfolio plus a conversion of its subordinated debt. It had already achieved half of this goal.

But the supervisor clearing exercise only focused on the needs accounted for under the newly enacted reform, the green light being assorted with an urging warning to front-load the disinvestment programme and to introduce sweeping changes in corporate management. No one seemed to pay much attention to this caution conveyed in an undisclosed way.

Volatility has been triggered by the same recommendation openly issued by IMF. The government was undoubtedly aware of the staggering effects such a report might have on overall solvency. Yet it was ready to take the risk, in order to put the lid on BANKIA’s reckless manoeuvring. Such a canny strategy backfired, as lack of confidence spread. Speculation raised up to €100 billion the likely bill to be footed by public finances in revamping the banking industry. As a result, sovereign debt risk premium and financial quotations in the stock market suffered an unmitigated battering.

BANKIA rescue has come as a relief, as the sole outstanding problem-ridden systemic entity might be dealt with a public capital injection as low as €7 billion. Such a comfortable level dispels fears as to the amount of extra public money involved. It also avoids the threat for big banks to being forced to salvage BANKIA.

Nevertheless, markets have become increasingly aware that a reform exclusively targeted to clean-up real estate bad loans fails to address overall needs in a depressed situation.  Extra resources to fill the holes in the balance sheet will be increasingly difficult to find when margins are so severely squeezed by sluggish economic activity. So, problems in the financial sector are bound to resurface sooner or later.

Be the first to comment on "BANKIA rescue does lift uncertainties, for the moment being"